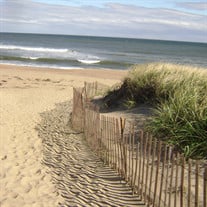 Portsmouth - James William Leavey, known to friends as “Jim,” died on September 12, 2019, at Portsmouth Regional Hospital at the age of 65. Mr. Leavey was born on December 24, 1953 in Queens, New York, to the late John Gerald Leavey and Lorraine (DelGiorno) Leavey. He was raised in an Irish-Italian-American household in Briarcliff Manor, New York, where he was educated in the Catholic school system. Mr. Leavey graduated with honors from the Boston University School of Management in 1975. While at school, he would meet his wife of 42 years, Claire McGoldrick, whom he married in 1977. In 1983, Mr. Leavey left a career as a sales representative at IBM to start his own software business in Manchester, New Hampshire. SNAP Software was one of the first salesforce automation companies; a business which he successfully ran until selling it to Dun & Bradstreet in 1990. He continued his work at the cutting edge of the data integration system field with his own sales consulting business before accepting the CEO position of Scribe Software in Bedford, New Hampshire. Jim was an accomplished pianist and a frequent host of lively parties at the family lake house in Bristol, New Hampshire. Since 2002, following a massive stroke, he valiantly persevered through tremendous physical challenges. During this chapter of his life Mr. Leavey’s artistic spirit flourished through his painting and photoshop creations. He moved, with his wife, to Portsmouth, New Hampshire, where he was lovingly cared for by a tribe of occupational therapy students from the University of New Hampshire. The family remains eternally thankful for their love, compassion, and support through the years. Mr. Leavey is survived by his wife, Claire Leavey; sons, Christopher and Michael Leavey; daughters-in-law, Kerry DeTora and Cat Buckley; grandson, Colin; and a beloved extended family. He is preceded in death by his parents and brother John Leavey. A celebration of his remarkable life, which will include music and dancing, will be announced at a later date. Please check back for announcement of date and time of celebration.

The family of James W. "Jim" Leavey created this Life Tributes page to make it easy to share your memories.

Send flowers to the Leavey family.