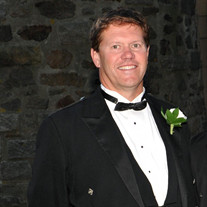 Rye- On Thursday, October 22nd, two very special friends of James W. McCarthy saw a shooting star cross the sky. Flying over the ocean in the clear night, the star—following a very unusual path-- covered the entire horizon. Jim had taken his last breath that morning, and they smiled because they knew they had just seen Jim. Jim loved to fly—whether it was across the water at the helm of a catamaran or through the clouds in the plane he owned with his good friend. He didn’t grow up with any of the luxuries that these avocations represented, but he was determined to excel at them once they were within his reach. Jim’s sailing skill was something to behold. He competed in the 2002 Olympic sailing trials, but you had to know him a long time before he would tell you that. When his son, Nicolas W. McCarthy, announced that he would learn to fly, Jim was filled with pride. Jim grew up facing more challenges than most. It was second nature to him to turn each of those challenges into a goal and then each of those goals into an accomplishment. His greatest attribute may have been his perseverance. Jim always knew his way around the word “no”. To him it was just an invitation to become more creative. Though he endured pain from years of back issues, he decided in his mid-fifties to drink the Kool-aide at Cross Fit Portsmouth and compete with men and women twenty years his junior. Like everything else, he embraced the adventure, made new friends….and occasionally nursed a pulled muscle. Jim had a huge heart. He understood what it meant to go without and, as he achieved success in his business life, he generously gave back. His community involvement revealed where his passions lay: Cross Roads House, Piscataqua Sailing Association, and Abenaqui Country Club. He rode in the Pan Mass Challenge for years—not knowing he himself might need the help of Dana Farber one day. A man of integrity, he was a fiercely loyal friend, an advocate for his clients, and sometimes just a big sentimental mush. He adored his wife and business partner, Monica McCarthy (formerly Ness), and she him. He was the love of her life. Some family members believe he managed to fight off cancer as long as he did so he could make it to their wedding date just last month. Alongside Monica and Nicolas, Jim will be sorely missed by his daughter-in-law, Kelly McCarthy, daughter, Tanya M. McCarthy, mother, Carole A. McCarthy, siblings Bonnie McCarthy, Michael McCarthy, and Heather McKay, his four grandchildren, and many nieces and nephews. His optimism and positive approach to life endured to the end. Most friends never really knew how sick he was. His bravery was palpable, and it was easy to believe him when he said he would beat his cancer. He had researched every possible treatment in his determination to do so. Had there been answer, he would have found it. Services will be limited to family and friends. In lieu of flowers and in honor of Jim’s community involvement, gifts to Cross Roads House, 600 Lafayette Road, Portsmouth, NH 03801 or Families First Health and Support Center, c/o Development Department, 100 Campus Drive, Suite 12, Portsmouth, NH 03801 would be greatly appreciated.

The family of James McCarthy created this Life Tributes page to make it easy to share your memories.

Send flowers to the McCarthy family.