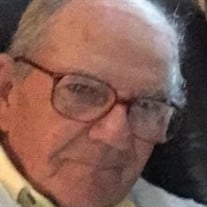 Kittery, ME - James Lewis Moore, 96, passed away peacefully on Wednesday November 10, 2021. He was born in Somerville, MA on November 12,1924 to James B. and Catherine (Lewis) Moore. Jim was raised in Somerville, the oldest of 8 surviving children. He was raised Roman Catholic and was in the choir at his church. He also talked about singing on WMEX radio in Boston around that time with John Kiley as the organist accompanying him. Anyone who met him knew how much he loved to sing and he had a great voice. He was also a fan of the Braves when they played in Boston and was a “ball boy” and said he saw Babe Ruth play during his last season in Boston. He said during his grade school years he was nicknamed “Dinty” after Dinty Moore Beef Stew that was popular at that time. This nickname resurfaced during his time at Oceanside Nursing Facility with some of the staff affectionately calling him “Dinty”. He was a WWII veteran of the Italian Campaign, fighting bravely as an army ranger in Italy up to the liberation of Rome. He was wounded sustaining shrapnel in his eye leaving him legally blind in that eye. Whenever he was thanked for his service he always quipped "Don't thank me, I was drafted." He did have some fond memories of serving with certain celebrities such as Audie Murphy and Phil Silvers. He relayed how grateful the Italian people were to have our troops there. He also enjoyed being a boxer during his time in the service with a great record of wins in his weight class. When he returned home he was introduced to Edythe Marie Cherksey or "Teddie" by his cousin Mildred, who he described as the most beautiful woman! Strangely enough they were already related by marriage as his Uncle Duffy Lewis was her mother's second husband! They were married on March 9, 1946 and were together for 69 years until her passing in 2015. They lived in Pennsylvania and New Jersey and he worked for the post office in Penn Pines but then found his calling as a salesman working for Ford Lincoln Mercury dealerships and achieved being a member of the Ford 500 Club, given to celebrate salesmen reaching this milestone. He also spoke about meeting and selling vehicles to celebrities including, Debbie Reynolds, Elizabeth Taylor and Ed McMahon. The family moved to Hampton, NH from Toms River, New Jersey in 1959. He worked at both the Portsmouth and Charlestown Naval Shipyards over the years as well as various small business ventures along the way. Then he became Chief Clerk as part of the International Longshoreman's Association for John T. Clark & Sons at the Portsmouth Commercial Pier in Portsmouth, NH. This was something he was very proud of, as his father had been the Chief Clerk at the Boston, MA commercial pier many years before. During this time he also pursued an interest in antiques and had his own shop, the Treasuretrove in downtown Portsmouth. They moved to York, ME in 1974 and to Greenland, NH in 1984. Eventually they retired to Sebastian, FL in 1990 where he worked with a golf pro, Ray Ladd in his golf shop. He was an avid golfer and golf fan and talked about meeting celebrities and golf pros at different golfing tournaments including Efrem Zimbalist, Jr, Jackie Gleason and Donald Trump. Jimmy was quite a character and had the ability to talk to anyone, his friendly and charismatic demeanor made him memorable to anyone he met. He told great stories about his life experiences and people he met along the way and he loved to sing for everyone. He will be greatly missed by his family and friends and remembered fondly for his singing and his story telling. He is survived by his son Reverend Michael Bruce and his wife Mary Yoly Moore of El Paso, TX, his daughter, Colleen "Jaime" Poirier and her husband, Rene of Kittery ME and his son-in-law, Frank Hale of Fremont, NH. He also leaves his brothers, Robert, Frank, and Jack Moore and his grandchildren Matthew Poirier and his wife, Jennifer of Philadelphia, PA, Melissa Poirier and her husband, Lucas Tafel of South Berwick, ME, Megan Poirier Westman and her husband Neil of Hampton, NH and Michael Poirier and his wife Nicole of Gorham, ME, Karen (Hale) Snopek and her husband Kevin of Raymond, NH, Kevin Hale and his wife Tammy of Hampton, NH, Stephanie (Moore) Williams and her husband, Daniel, Michael Samuel Moore and Kathleen (Moore) White and her husband, Jeffrey of Colororado. He is also survived by great grandchildren Katie Hale, Kevin Hale, Jr., Chase Poirier McClain, Amelia Poirier McClain, Harrison Poirier, and Felix Poirier Westman and Alexander White and Summer White. He was preceded in death by his beloved wife of 69 years, Marie as well as his daughter, Susan Maureen Hale and his son James Brian Moore and his brothers Richard, Daniel & Roderick Moore and his sister Joan Roach. A Graveside Service will be held at 10 AM on Saturday, November 20, 2021 in the Calvary Cemetery, Rt. 33 in Portsmouth, NH.

Kittery, ME - James Lewis Moore, 96, passed away peacefully on Wednesday November 10, 2021. He was born in Somerville, MA on November 12,1924 to James B. and Catherine (Lewis) Moore. Jim was raised in Somerville, the oldest of 8 surviving children.... View Obituary & Service Information

The family of James L. Moore created this Life Tributes page to make it easy to share your memories.

Kittery, ME - James Lewis Moore, 96, passed away peacefully on...