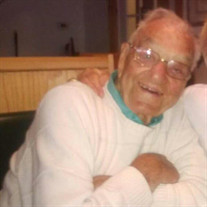 Portsmouth - James Varotsis, 93, of Portsmouth, died peacefully on Monday, January 30, 2017 at Portsmouth Regional Hospital. He was born in Portsmouth on June 22, 1923 a son of the late Roy and Angel (Grillo) Varotsis. Raised in Kittery, ME, he graduated from R.W. Traip Academy with the Class of 1941. He went on to attend the University of New Hampshire before leaving to enlist in the United States Navy, where he proudly served on board the USS Sumner during World War II. Returning home he went back to school and received his mechanical engineering degree from Wentworth Institute of Technology in Boston. Moving to the New Hampshire Seacoast he started his own company, Varotsis Plumbing & Heating which he owned and operated for over 30 years until his retirement in 1990. Mr. Varotsis was a member of the Knights of Columbus, Portsmouth Elks Lodge 97, Portsmouth Country Club, New Hampshire 100 Club and avid supporter and contributor to the Working Dog Foundation, of which he was a lifetime member, and a member of the Warwick Club. Jim was an avid Portsmouth High School Athletics supporter and promoted local hockey when he formed the Varotsis Plungers. As a proud member of the Republican Party, he was appointed to many positions within the State of New Hampshire; and was a former Commissioner of the New Hampshire Department of Environmental Services for 40 years, as well as the head of the State Plumbing Board. James was an avid golfer and skier, who enjoyed cribbage and poker. He especially liked watching the Boston Bruins and was a former season ticket holder for many years. But most important to him was spending time with his family and granddaughter. He shared 54 years of marriage with his late wife Veronica (Critchley) Varotsis who predeceased him in 2004. Family members include his daughter Lisa Varotsis of Stratham; son James Varotsis of Portsmouth; sisters, Mary Marshall and Alice Buchanan both of Kittery, ME; granddaughter Lindsey T. Martell and her husband Peter Nagy of Allentown, PA and several nieces and nephews. In addition to his parents and wife, he was predeceased by his sisters, Christine Pelkey and Rita Perry. James will be best remembered for his passion for life, and desire to truly make a difference in the lives of those he touched. He was blessed to live a long and fruitful life. Visiting hours will be held from 4 to 8 PM on Friday, February 3, 2017 in the Remick & Gendron Funeral Home-Crematory, 811 Lafayette Rd., Hampton. A Mass of Christian Burial will be celebrated at 11 AM on Saturday at St. Theresa Church, 815 Central Road, Rye Beach. Family and friends are respectfully invited. Burial will be private. In lieu of flowers donations may be made to the Working Dog Foundation, PO Box 22312, Portsmouth, NH 03802 or click below https://www.paypal.com/us/cgi-bin/webscr?cmd=_flow&SESSION=qG4ssXLU5gOODPSx-IQVBqafkkHDEFJw5wlNZIHb_Y31C2-2zqL4xUuhepe&dispatch=5885d80a13c0db1f8e263663d3faee8d333dc9aadeed3fe0b5b299d55fd35542

Portsmouth - James Varotsis, 93, of Portsmouth, died peacefully on Monday, January 30, 2017 at Portsmouth Regional Hospital. He was born in Portsmouth on June 22, 1923 a son of the late Roy and Angel (Grillo) Varotsis. Raised in Kittery, ME,... View Obituary & Service Information

The family of James Varotsis created this Life Tributes page to make it easy to share your memories.

Send flowers to the Varotsis family.