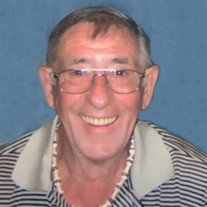 Seabrook – James A. “Sonny” Watts Jr., 84, a lifelong Seabrook resident, passed away peacefully on Friday, December 18, 2020 at his home surrounded by loving family. He was born in Newburyport on April 7, 1936 the son of the late James A. and Alice M. (LaRochelle) Watts. Raised in Seabrook he graduated from Amesbury High School. He went on to proudly serve 3 years in the United States Army, where he met the love of his life and wife of 56 years Anne while stationed in France. Sonny had racing in his blood. Having grown up around the family auto repair business, Watts Garage, which he purchased from his father in 1977 and operated for the next 30 years before passing it on to his sons. He loved anything with engine, but his greatest joy was car racing with his family all over the Northeast. He was especially proud of his open wheel modified. He was a member of the Raymond E. Walton American Legion Post 70. In addition to his wife Anne of Seabrook, surviving family members include his children, Sherry Morton and her husband Glen of East Wakefield, Robert M. Watts Sr. and his wife Susan of Seabrook and Scott J. Watts Sr. and his wife Tia also of Seabrook; sister, Jacqueline Bagley of Seabrook; grandchildren, Jesse, Justin, Telisha, Robert Jr., Alyssa, Ryan, Sarah and Scott Jr.; many great grandchildren; several nieces and nephews and numerous extended family members in France. Visiting hours will be held from 5 - 7 PM on Tuesday, December 22, 2020 in the Remick-Gendron Funeral Home-Crematory, 811 Lafayette Road, Hampton. Services will be held at 11 AM on Wednesday, December 23, 2020 in the funeral home. Burial will follow in the Hillside Cemetery, Seabrook. Relatives and friends are respectfully invited. In lieu of flowers, donations may be made to St. Jude Children's Research Hospital , 501 St. Jude Place, Memphis, TN 38105.

The family of James A. "Sonny" Watts Jr. created this Life Tributes page to make it easy to share your memories.

Send flowers to the Watts family.