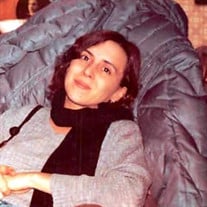 Hampton - Jane Ellen Laier, 60, originally of Lynnfield, MA passed away peacefully on April 25, 2020 after a long illness. A New Years’ baby, Jane was born on January 1, 1960, a daughter of the late Carl and Jean (Furbush) Laier, Jane’s passions included photography, the Arts, and especially music. After attending The Walnut Hill School for the Arts in Natick, MA as well as The Connecticut School of Broadcasting, she achieved her dream of a career in radio broadcasting. Jane’s distinctive voice could be heard on radio stations in the Boston Radio Market on WBOS, WXRV - The River, and throughout New England including WSRO in Marlboro, MA, WMDK Manchester-Concord, WCLZ and The FOX radio stations in Maine among others. Jane considered herself a “lyric-freak” and had the pleasure of meeting some of the music greats of our time. Recognized by the New England Broadcasting Association with an Associated Press award for broadcast news excellence, she was also a popular sidekick on the well-known “Woody Woodland” talk show in Manchester, NH, talking politics and life. Jane was kind and very strong. A true woman of character, extremely practical and fiercely independent, she overcame major physical limitations while maintaining a tremendous sense of humor. Jane made a positive impression on everyone she met and would stand up for others and always “do what’s right”. She was an inspiration for us all. Jane leaves her sister Frieda and her husband David Barrows, brothers Eric and Peter Laier, her sister-in-law Kerry Stone and many nieces and nephews. She also leaves her longtime friend Steven Salloway. Funeral services will be private; memorial donations in lieu of flowers can be made to the North Shore Animal Hospital, ATTN: Lauren, 1 Neptune Blvd., Lynn, MA 01902.

The family of Jane E. Laier created this Life Tributes page to make it easy to share your memories.

Send flowers to the Laier family.