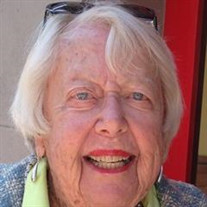 Hampton - Jane Wingate Quayle of Hampton, died of natural causes at age 94 on November 12, 2017 in Lexington, MA. Jane was born on October 17, 1923 and raised in Windsor Locks, CT. Her parents were Herbert Alfred Wingate of Collinsville, CT and Florence E. Cook of New York, NY. She was a graduate of the Loomis Chaﬀee and Skidmore College. During her college years she was engaged to her childhood sweetheart, George Quayle. George served in the U.S. Army Signal Corp in the Pacific theater during World War II and Jane volunteered for the Aircraft Warning Service, the civilian branch of the U.S. Army Ground Observer Corps. This organization was instituted during the war to watch for enemy planes entering American airspace. Jane was a successful business owner and real estate broker. She established and partnered Quayle Johnson Real Estate in Marblehead, MA in the 1970s and Quayle Congdon Real Estate in Hampton, in the 1980s-90s. Her New Hampshire and Massachusetts broker’s licenses were both active at the time of her death. She was a fierce competitor, both in business and sports. She won many golf competitions with her business partner and friend Richard Johnson. She was an avid sailor, competing with her husband George in the Marblehead Town Class fleet, and a lifelong swimmer, continuing to swim laps and participate in swim aerobics into her 90s. She also was an accomplished bridge player and snappy dresser who loved a good cocktail and was always the life of the party. Jane loved to travel and journeyed to China with a group from her Harvard University extension course on Chinese culture around 1982, just after China opened its border to foreign tourists. Jane was a strong and independent person, continuing to drive from New Hampshire to Florida alone with her dog Gigi into her nineties. When asked why she would respond, “It’s an adventure!” Jane had several dogs during her lifetime and diﬀerentiated between dog lovers and non-dog owners. She is fondly remembered for her incisive, outspoken opinions, stellar gardening skills and her delicious home-baked goods. Jane was a loving friend and mother who reveled in her children's and her grandchildren’s accomplishments in academics, sports and careers. She was predeceased by her husband George Quayle and sister Barbara McGowan. She leaves her three children and their families, Dwight Wingate Quayle and his wife Deborah Manegold, Jane Elizabeth (Betsy) Quayle, Sharon Suzanne Quayle and her husband W. Roger Buck, and seven grandchildren. A memorial service will be held at a later date and will be announced by the Remick & Gendron Funeral Home-Crematory, Hampton. In lieu of flowers, please consider a donation to the following: St. Andrew’s-by- the-Sea, 30 Church Road in Rye Beach, NH 03871, Planned Parenthood, or ASPCA.

The family of Jane Wingate Quayle created this Life Tributes page to make it easy to share your memories.

Send flowers to the Quayle family.