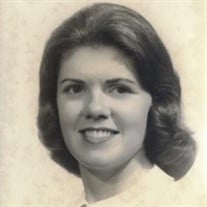 Hampton - Janet Dey Martin, of Hampton, passed away peacefully on Wednesday, July 7, 2021. Janet was born in Boston, MA on May 5, 1939, the daughter of the late Willard and Helen Martin of Laconia New Hampshire. Janet was raised in Laconia, graduated from Laconia High with the Class of 1957 and went on to earn her bachelor’s degree in Business/Secretarial Studies from the University of New Hampshire. She married Bruce Carter, an Air Force Officer, in 1962. The family was stationed in several places around the country and the Philippine islands before settling back in New Hampshire in the 1970’s. Janet worked as a receptionist with State Farm Insurance and went forward to earn her insurance agent’s license. She worked at Tobey and Merrill insurance of Hampton for many years, and A. D. Davis insurance of Newmarket. Janet also was a licensed real estate agent in NH and worked with the Caufield Agency in North Hampton. Janet was a loving and caring mother to her girls and devoted her time to her family and friends. She was an active member of Christ Church in Exeter and Rye Congregational Church in Rye. Janet was always available to help and offer compassion. She worked with her fellow parishioners and community members helping those in need. She is survived by her daughters Rhoda Sommer and her husband David of Farmington NH and Laurelynn Carter and her fiancé Alex Ghersi of Hampton Falls . Janet was very proud of her grandchildren Michelle Hobbs, Julia and Mark Sommer, and Tate and Coleman Perkins. Janet leaves her brother and sister in law Donna and David Carter and her nieces Lindsey and Melissa Carter. She also leaves her brother Richard Martin and her sister in law Cora Martin and sister in law Margaret Martin, and her nieces and nephews Rick, Holly, Stephen, Helen, Melissa, and Galya Martin. Janet was predeceased by her brother, Willard G.Martin Jr. and her niece, Abigail Martin. An evening memorial service will be held at Rye Congregational Church 580 Washington Rd Rye, NH 03870 at 6pm on Friday August 6th 2021. The family asks that in lieu of flowers those donations be made to Rye Congregational Church P. O. Box 862 Rye, New Hampshire. Janet donated her time to the church and when she needed assistance as she became in poor health the church was there for her in many ways. Janet and her family would be thankful for donations to the church to help others.

Hampton - Janet Dey Martin, of Hampton, passed away peacefully on Wednesday, July 7, 2021. Janet was born in Boston, MA on May 5, 1939, the daughter of the late Willard and Helen Martin of Laconia New Hampshire. Janet was raised in Laconia,... View Obituary & Service Information

The family of Janet D. Martin created this Life Tributes page to make it easy to share your memories.