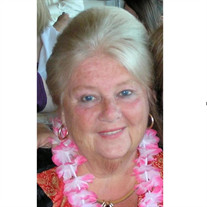 Hampton Falls – Janet M. (Clocher) Poisson, 77, of Hampton Falls, died peacefully, surrounded by her family, Thursday, March 24, 2016 at the Merrimack Valley Hospice House in Haverhill, Mass. What a beautiful woman and incredible life Janet lived. There are no more powerful words than loving, giving and kind to describe the essence of Janet and how she chose to live her life. Upon her cancer diagnosis Janet was grateful for the time she had to spend with family and connect with dozens of friends who’s lives she touched through visits, calls and hand written notes – showing amazing grace by thanking others and saying her good-byes. Saying many times, “I haven’t had a sad or a bad day.” While many will remember Janet as the founder of Quicksilver Fine Jewelry, it was her gift of caring that mattered most. Janet’s love of her husband, children and grandchildren was absolute. She spent much time baking and cooking for family, friends and OLMM OutReach. Not being hungry was never an acceptable excuse for not enjoying her meatballs and brownies! The tides at the beach will rise tomorrow, the sun will shine and while Janet’s eyes may be closed her heart remains with each one of us and with that comes her gifts of love, giving and kindness. Janet is survived by her husband and love of her life, Leo J. Poisson, Sr., her children, Karen Collins and her husband Mark, Leo Poisson, Jr. and his wife Lisa, Michael Poisson and his wife Lucy, Susan Kennedy and her husband Don, her grandchildren, Wes and his wife Alison Collins, Bryan Collins, Theo, Lindsey and Collette Poisson, Lyle and Gabi Poisson, Spencer, Morgan and Callan Kennedy. Her brother, Robert Clocher, preceded Janet in death. Visiting hours will be from 4 – 7 P.M. Sunday, March 27, 2016 at the Remick & Gendron Funeral Home, 811 Lafayette Road, Hampton. A mass of Christian burial will be celebrated at 11 A.M. Monday, March 28, 2016 at Our Lady of Miraculous Medal Church, Hampton. Relatives and friends are respectfully invited. After cremation private interment will be in the Oak Lawn Cemetery Hampton Falls. In lieu of flowers, donations may be made to Our Lady of the Miraculous Medal Church OutReach Program, 289 Lafayette Road, Hampton, NH 03842.

The family of Janet M. Poisson created this Life Tributes page to make it easy to share your memories.