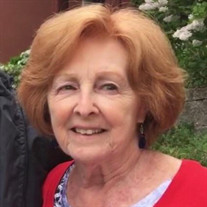 Hampton - Janet Theresa Smith, 79, of Hampton, passed away peacefully on Sunday, September 26, 2021, her birthday, at her home with beloved family at her bedside. Janet was born in Somerville, MA on September 26, 1942, a daughter of the late Daniel and Hanna May (Sullivan) O'Shea and shared over 30 years of marriage with her beloved husband, Richard G. Smith of Hampton. Janet was raised in Somerville and graduated from St. Clement High School with the Class of 1960. She was married shortly after graduation and raised her family in Reading and Boxford, MA and worked as a secretary for the Masconomet School System for many years. Janet married Richard in 1990 and they relocated to Hampton. At the age of 50, Janet earned her Bachelor's Degree from UNH where she graduated Phi Beta Kappa and became a tutor in the Masconomet System until her retirement in 1999. In addition to her husband Richard, family members include her sons, Richard Murphy and his wife, Patricia, of Hanover, MA, Michael Murphy and his wife, Julia, of Charlotte, NC, her daughter, Cara Murphy-Falvey and her husband, Michael, of No. Andover, MA and her grandchildren, Molly and Katie Henry, Carson, Kate and Colin Murphy and Bria and Quinn Smith. She also leaves her sister, Mary Corbett and her husband, Joseph, of Bradenton, FL and her brothers, Timothy O'Shea and his wife, Katherine, of Gloucester, MA, Robert O'Shea and his wife, Marie, of Venice, FL, Daniel O'Shea and his wife, Mary Rita, of Melrose, MA and William O'Shea and his wife, Christine, of Woburn, MA. Janet traveled extensively with her husband throughout the United States as well as to Europe and the Caribbean. Her favorite trips, however, were those to her beloved Ireland, where she visited with extended family and reconnected with her Irish roots. Janet was an avid reader and a wonderful cook, and she was well known for specialties including amazing meatballs, authentic Irish soda bread, and her trademark blueberry buckle. Janet was a devoted mother and grandmother and “the best wife in the world” according to her husband. Visitation will be from 5 to 7 pm on Friday, October 1, 2021 in the Remick & Gendron Funeral Home - Crematory, 811 Lafayette Rd., Hampton. A Mass of Christian Burial will be celebrated at 1 pm on Saturday at the St. Theresa Church, 815 Central Rd., Rye Beach. Burial will be private. In lieu of flowers, donations may be made to the Merrimack Valley Hospice, c/o Home Health Foundation, Attn: Community Engagement, 360 Merrimack Street, Building 9, Lawrence, MA 01843.

Hampton - Janet Theresa Smith, 79, of Hampton, passed away peacefully on Sunday, September 26, 2021, her birthday, at her home with beloved family at her bedside. Janet was born in Somerville, MA on September 26, 1942, a daughter of the late... View Obituary & Service Information

The family of Janet Theresa Smith created this Life Tributes page to make it easy to share your memories.