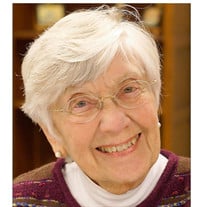 North Hampton – Jayne Alberta de Constant, 93, of North Hampton, died peacefully surrounded by her loving family on Sunday, September 1, 2019 at her home. She was born in Arlington, Massachusetts on August 24, 1926, the daughter of the late Archibald and Gladys (Somers) Gillis. Raised in Belmont, Massachusetts she graduated from Belmont High School with the Class of 1944 and graduated from Bradford College in Bradford Massachusetts, 1946 and Hood College in Fredrick Maryland, 1948. Jayne summered with her family at Hampton Beach where she met her husband of 48 years, the late Dr. Jean W. de Constant of Louisville Kentucky, who predeceased her in 2003.They were married in 1955 and moved to Andover, Massachusetts to raise their family. They spent many happy summers at Rye Beach creating memories to last a life span. She started her career as a kindergarten teacher at the Saint Margarets school in Waterbury, Connecticut. Jayne volunteered and served as the president of the Lawrence General Hospital Aid Association in Lawrence, Massachusetts for numerous years and later directed various nursery schools and kindergartens in Andover, Massachusetts. Lastly, she was the director of The Little Executive Center in Burlington, Massachusetts for 18 years. In her retirement, she was a writer for Rye Reflections, a local on-line magazine. Jayne enjoyed time with family, her two grandchildren, dear friends, many of whom spanned her lifetime, and reading books and newspapers. She always had a willingness to laugh, sing, tell a story, discuss the world, make a friend and share a smile. She was a lover of animals and took great delight in their companionship. Surviving family members include her sons, Mark de Constant of Portsmouth and Alex de Constant and his wife Lauren Burke de Constant of North Hampton; grandchildren, Maeve and William de Constant both of North Hampton. Also survived by cousins, Gladys Somers Pessotti and family of Burlington, MA and Jean Gillis Moretti and family of Saugus, MA. Visiting hours will be held from 3-6 PM on Saturday, September 7, 2019 in the Remick & Gendron Funeral Home-Crematory, 811 Lafayette Road, Hampton, NH 03842. Relatives and friends are respectfully invited. In lieu of flowers, donations may be made to Friends of North Hampton Public Library, 237A Atlantic Avenue, North Hampton, NH 03862.

North Hampton &#8211; Jayne Alberta de Constant, 93, of North Hampton, died peacefully surrounded by her loving family on Sunday, September 1, 2019 at her home. She was born in Arlington, Massachusetts on August 24, 1926, the daughter of the... View Obituary & Service Information

The family of Jayne Alberta de Constant created this Life Tributes page to make it easy to share your memories.