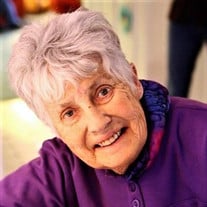 Exeter – Jean E. Cusack, 81, of Exeter, died Wednesday, December 28, 2016 at Langdon Place in Exeter with loving family by her side. She was born May 28, 1935 in Westchester, PA the daughter of the late David and Edna (Bender) MacDonna, Sr. She was a graduate of Miami Edison High School in Miami, FL, and attended Florida State University where she pursued a degree in Art Education and Social Science. Jean was predeceased by her husband, Lt. Col. George G. Cusack USMC who was killed in a military training accident while on reserve duty on December 6, 1969 at the age of 36. At the time he was killed he was a Captain for Eastern Airlines at Logan Airport in Boston. Jean went on to raise their six young children in Hampton where she lived until recently moving to Langdon Place of Exeter. The family spent nearly every school vacation and summer at Fernhill Lake Colony Resort on Half Moon Lake in Barnstead and on the slopes of Gunstock Ski Resort during the ski season. While raising her six children, she was active in the school system and her community as a school library volunteer, a tutor in the Junior High School Resource room, was a parent representative to the Hampton Gifted and Talented Program, served on the Hampton Municipal Budget Committee, was chairman of the Hampton Academy Junior High Parents Group and Hampton Academy Junior High Report Card Committee. After her children went to college, she was a foster mother to two young boys needing a safe and caring environment. Jean worked as a lunchroom monitor at North Hampton Elementary School from 1978-1986 and as a paraprofessional at Centre School from 1987 until her retirement in 2000. She was particularly enthusiastic about art. She was often requested by her colleagues to create decorated bulletin boards or design curriculum integrated art projects. She created the Centre School mascot logo of the "Dolphin". While at Centre, she was admired and loved for her art work. She was very close to and fond of all of her colleagues. They all agreed that she could make something out of nothing and was a pleasure to work with. Although she struggled with some health issues she never complained about anything. She loved the children, never refused anyone that asked for help, was easy to work with, and best of all had a great sense of humor! Since moving to Langdon Place of Exeter she became involved in many creative and social activities and she loved all of the staff and residents. She was a master at Bingo and a leader in the arts and crafts room. A meaningful project that she was involved in last year was the creation of a seacoast Christmas miniature village. Recently she was honored by the New Hampshire Health Care Association when one of her art pieces was selected as a winning entry in the 2017 Annual NHHCA Annual Calendar Contest. Jean was a true animal lover. While raising her six children, the family pets always included dogs, cats, rabbits, mice and several tanks of fish for which she lovingly cared for.. After her retirement from Centre, she adopted two severely abused cats and gave them a forever home. Each pet held a special place in her heart. This love of animals began in her youth as her family bred, raised, trained, and showed champion Doberman Pinschers and they were active in the American Kennel Club. After she retired from Centre School she was often asked to assist with art projects or be a guest reader there. She also began doing dog therapy by visiting the residents at Partridge House and Oceanside Assisted Living Facility with her affectionate and spirited female schnauzer Allie. She was a great story teller. People loved her stories so much that they encouraged her to write them down so they could be shared. Jean was often compared to Erma Bombeck in her style of humor and writing. Jean is survived by six children, Michael G. Cusack and his wife Susan (Kenney) Cusack of York, ME, their three children Emma, Matthew, and Amanda; Linda S. Libbey and her husband Morton H. Libbey Jr. of North Hampton and their three children Paige, Shea and Bryce; Kerry A. Woodilla and her husband Brian Woodilla of Exeter and their three children Kyle, Kevin and Allison; Michelle J. Turcotte and her fiancé Craig Taylor of East Kingston and their four children Colleen and Lindsey Turcotte of Hampton and East Kingston and Brianne and Matthew Taylor of Windham; Brodie G. Cusack of Los Angeles, CA and his daughter Samantha; George G. Cusack, II of Savannah, GA and his wife Dawn (Bedford) Cusack and their two children Abigail and Lillian, beloved sister in law, Carolyn (Maitland) Macdonna and many wonderful nieces and nephews. In addition to her husband and parents, she was predeceased by her brother, Rev. David Macdonna, Jr. and her sister in law, Joanne C. Crane. Visiting hours will be from 1-4 P.M. Sunday, January 1, 2017 at the Remick & Gendron Funeral Home-Crematory, 811 Lafayette Road, Hampton. Services will be held at 11 A.M. Monday, January 2, 2017 in the funeral home. Relatives and friends are respectfully invited. Interment will be immediately following the service. In lieu of flowers, memorial donations can be sent to the New Hampshire Society for the Prevention and Cruelty to Animals (NH SPCA) at P.O. Box 196 Stratham, NH 03885. Donations can also be made online to www.nhspca.org.

Exeter &#8211; Jean E. Cusack, 81, of Exeter, died Wednesday, December 28, 2016 at Langdon Place in Exeter with loving family by her side. She was born May 28, 1935 in Westchester, PA the daughter of the late David and Edna (Bender) MacDonna,... View Obituary & Service Information

The family of Jean E. Cusack created this Life Tributes page to make it easy to share your memories.