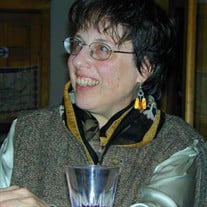 Rye - After a period of failing health, Jean Schneer Silverman passed away peacefully on December 30, 2021 at Webster at Rye where she spent her final days. Jean was born in New York City on May 6, 1945 the daughter of the late Cecil and Mary (Barsam) Schneer. Her father’s appointment as Professor of Earth Sciences at UNH in 1954 took the family to New Hampshire where Jean spent her formative years. After her undergraduate education at the University of Wisconsin, graduate study at the University of Pennsylvania and a stint in New York City, Jean returned to the Seacoast where she remained for her adult life, most of which she spent in the antique house in the Newmarket woods which had been her childhood home. She brought back with her an urban flair, expressed through a love of beautiful shoes, clothes, scarves and rugs. Jean was both a scholar and an artist. She received her Ph.D. in 1978 from Penn’s program in Art and Archaeology of the Mediterranean World, writing her dissertation and other scholarly essays about pottery from Gournia, an ancient Minoan site on Crete. Her love of clay objects transcended the intellectual, however, and after her return to New Hampshire Jean began to work in clay herself, ultimately founding her business, Plum Tree Pottery, in a studio adjacent to her residence in Newmarket. She was an active member and officer in the New Hampshire Potters Guild, she edited the Studio Potter Network Newsletter, an affiliate of Studio Potter Magazine, and she enjoyed and was enriched by her participation in many workshops and seminars. Jean married Ralph Silverman in the 1970’s and that marriage ended in divorce. In the 1990’s she married her second husband, the late Bob Hoddeson. She was a life-long and devoted cat-fancier. She is survived by her brother David Schneer of Exeter, NH, several loving cousins, and by many loyal friends who will miss her engaging smile and piercing wit. A celebration of her life will be held in the spring. In lieu of flowers, memorial donations may be made to the New Hampshire SPCA, PO Box 196, Stratham, NH 03885.

Rye - After a period of failing health, Jean Schneer Silverman passed away peacefully on December 30, 2021 at Webster at Rye where she spent her final days. Jean was born in New York City on May 6, 1945 the daughter of the late Cecil and Mary... View Obituary & Service Information

The family of Jean S. Silverman created this Life Tributes page to make it easy to share your memories.

Rye - After a period of failing health, Jean Schneer Silverman...