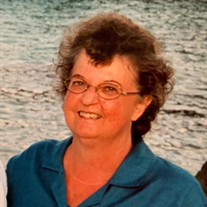 Rye - Jean Mary Trenholm, 76, of Rye, NH, passed away peacefully on Friday, March 1, 2019. Jean was born on January 17, 1943 in Medford, MA, a daughter of the late Eugene and Mary (Lodico) Trenholm. She graduated from Roslindale High School and received an Associate’s Degree from the Mount Ida College. Jean was an avid reader and was a well-known patron of the Rye Library. She also had a love of creating amazing soups and writing poems for special occasions for loved ones. She had a passion for football and when living in Texas, she was a Dallas Cowboy season ticket holder back in the 90’s but her first and last love was for the New England Patriots. Her legacy includes three children: Maryanne Crowell Goyette and her husband, Gary of Rye, Craig Crowell and his wife, Kathy of Greenland and Stacey Crowell Mood of Portsmouth; her five beloved grandchildren: Kendall, Katie, Zachary, Christopher & Kaden and her dear sister, Gail Trenholm. She also leaves her nephew, Daniel, her niece, Robin and her step-children Kathy Geraci Pridham and Michael Geraci. She was preceded in death by her mother, her father and her step-mother Jane. Visitation will be from 5pm to 7pm on Friday, March 8, 2019 in the Remick & Gendron Funeral Home – Crematory, 811 Lafayette Rd., Hampton. In lieu of flowers, the family requests that donations be made to Meals on Wheels 106 North Rd., Brentwood, NH 03833 or to the Rye Public Library, 581 Washington Rd., Rye, NH 03870. The family would also like to thank Webster of Rye for their loving care of our mother.

The family of Jean M. Trenholm created this Life Tributes page to make it easy to share your memories.

Send flowers to the Trenholm family.