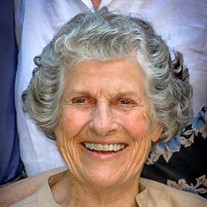 Portsmouth, NH – Jean C. Wright, 95, of Portsmouth, formerly of Dover, DE, died peacefully on Tuesday, August 4, 2020. Mrs. Wright was born in Dover, New Hampshire on March 4, 1925, a daughter of the late Ivan M. and Anna L. (Smith) Chalfant. When she was sixteen, her family moved to Indiana, where her father had been born, and she attended Rushville, Indiana High School. Upon graduation in 1943, she worked for a year in a defense plant in support of the war effort and then attended a two-year program at the Chicago Academy of Fine Arts. After leaving art school, Mrs. Wright worked in print and radio advertising in both Chicago and South Bend, Indiana before marrying Charles C. Wright on April 2, 1949. Theirs was a storybook romance that lasted more than sixty five years, until his death on October 7, 2014. Mrs. Wright was a practicing artist all of her adult life—as a teacher, a member of the Westfield, New Jersey Art Association, and the Dover Art League in Dover, DE. She won several prizes over the years for her work in watercolor, and mounted a well-received one-woman show, “Observations of Nature,” at the Delaware Agricultural Museum from June 24 – August 23, 2002. In 1985, she and her husband moved from Sparta, New Jersey to Dover, Delaware where they were very active in church and community affairs. A few years after her husband’s death, Mrs. Wright moved back to her childhood environs, living first at Maple Suites retirement community in Dover, New Hampshire, and in her last months at The Edgewood Centre in Portsmouth, New Hampshire In addition to her parents and husband, she was predeceased by her sisters Anna (“Brownie”) and Phyllis. She is survived by her daughters, Janet Wright Starner and husband, Jed, of Lehighton, PA and Jennifer Jane Wright and husband John of Cochranville, PA; her sons Robert Scott Wright and wife Lori Marie, of Rye, N.H. and Charles Chalfant Wright and wife, Ruth, of O'Fallon, Mo.; twelve grandchildren Lori, Hillary, Natalie, Anna, Justin, Jessica, Melissa, Nathaniel, Emilie, Ben, Joe, and Hope; twenty-two great-grandchildren Haley, Elina, Laura, Noah, Aidan, Kelly, Riley, Ethan, Owen, Henry, Evelyn, Lilly, Jackson, Jameson, Aiden, John, Amelia, Oliver, Jack, Atticus, Estelle, and Callan. All services will be private. In lieu of flowers, donations may be made to the Presbyterian Church of Dover, DE.

The family of Jean C. Wright created this Life Tributes page to make it easy to share your memories.