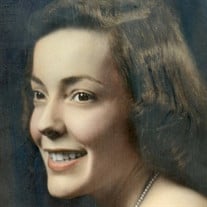 Hampton – Jeanne L. Benjamin, 86, of Hampton, died peacefully on Monday, June 5, 2017at Oceanside Skilled Nursing & Rehabilitation in Hampton. She was born in Manchester on June 6, 1930 a daughter of the late Winifred and Louise (Grenier) Miville. Raised in Manchester, she graduated from Manchester West High School with the Class of 1948 and went on to attend and graduate from the University of New Hampshire in 1952 with a Bachelor Degree in Bacteriology. Jeanne first worked a few years at the New Hampshire State Laboratories as a bacteriologist before leaving to work at her alma mater, UNH to be closer to her family. In 1958 she left UNH and dedicated her life to raising her family, in addition to the many neighborhood children she watched and helped raise. Jeanne was a member of the Alpha XI Delta Sorority during her time at UNH and later volunteered for the USO during the Korean War, providing support to the troops. She enjoyed years of Girl Scouts in her youth, reaching the most senior level, crossword puzzles, camping, the beach, family, and friends. Surviving family members include her husband of 62 years Robert E. Benjamin of Hampton; children, Valerie Johnson and her husband Peter of Lexington, MA, Robert Benjamin and his wife Kelly of Windham and Jackie Downing and her husband Michael of Barnstead; grandchildren, Brienne and her husband Sean, Alise, Laura, Cory, Brytni and Alexis. In addition to her parents she was predeceased by her daughter Michelle Sinclair and sister Marguerite Louise Miville. A Visiting hour will be from 10 to 11 AM on Wednesday, June 7, 2017 at Our Lady of the Miraculous Medal Church, 289 Lafayette Rd., Hampton. A Mass of Christian Burial will be celebrated at 11 AM immediately following the visitation. Burial will be at 12 PM on Thursday, June 8, 2017 in the New Hampshire State Veterans Cemetery in Boscawen. In lieu of flowers, memorial donations may be sent to Our Lady of the Miraculous Medal Parish, 289 Lafayette Rd., Hampton, NH 03842.

Hampton &#8211; Jeanne L. Benjamin, 86, of Hampton, died peacefully on Monday, June 5, 2017at Oceanside Skilled Nursing & Rehabilitation in Hampton. She was born in Manchester on June 6, 1930 a daughter of the late Winifred and Louise (Grenier)... View Obituary & Service Information

The family of Jeanne L. Benjamin created this Life Tributes page to make it easy to share your memories.

Send flowers to the Benjamin family.