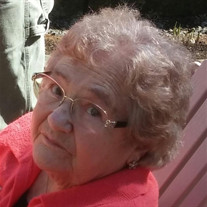 Hampton – Jeannine F. Doyon, 84, of Hampton, died peacefully Saturday, March 19, 2016 at Oceanside Skilled Nursing & Rehabilitation, Hampton. She was born March 23, 1931 in Berlin a daughter of the late Edmond and Marie Louise (Bouffard) Lacasse. Spending most of her life in Berlin she graduated from Notre Dame High School and worked at the former Brown Company for many years. She enjoyed sewing, knitting and bingo, but her greatest joy was spending time with her family, especially her grandchildren. Family members include her children, Michael Doyon and his wife Gail of Nashua and Denise Pelczar and her husband Michael of Hampton; brothers, Norman Lacasse and his wife Pat of Harrisburg, PA, Leo Lacasse and his wife Melinda of CA, Gerry Lacasse and his wife Lorraine of Holyoke, MA; sister Gertrude Paradise of Dover; grandchildren, Sarah Jeannette, Jennifer Russeau and Kaitlynne and Michael Arundel; great grandchildren, Lucas and Amelia Russeau, Grace Jeannette and several nieces and nephews. In addition to her parents she was predeceased by her daughter Diane Doyon; brothers, Clarence and Lucien Lacasse and her sister Aurora Lettere. Visitation will be held from 5 to 7 PM on Friday, April 8, 2016 in the Remick & Gendron Funeral Home-Crematory, 811 Lafayette Road, Hampton. A mass of Christian burial will be celebrated at 11 AM on Saturday, April 9, 2016 in Our Lady of the Miraculous Medal Church, 289 Lafayette Road, Hampton. Relatives and friends are respectfully invited. In lieu of flowers, donations may be made to the American Cancer Society, P.O. Box 22478, Oklahoma City, OK 73123 or the Alzheimer's Association, P.O. Box 96011, Washington, DC 20090.

The family of Jeannine Florence Doyon created this Life Tributes page to make it easy to share your memories.

Send flowers to the Doyon family.