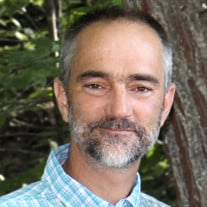 Strafford – Jefferson M. Wright, 48, of Strafford and formerly of North Hampton, passed away suddenly on Tuesday, May 9, 2017 at the Exeter Hospital. He was born in Rochester on November 7, 1968, the son of Allan E. Wright, Sr. of Northwood and the late Nancy A. (Gero) Wright. Jeff was raised in North Hampton and was a 1987 graduate of Winnacunnet High School. He married the love of his life, Polly (Osgood) Wright in 1995. Jeff worked with his father in the fire alarm business for many years before founding his own company, Active Fire Alarm in Brentwood, NH in 2006. Jeff was an avid outdoorsman who had a passion for deer hunting and deep sea fishing. He enjoyed many good times aboard the Mariah Rain, Ashley and Janice Marie. He is survived by his wife Polly and their two daughters Mariah and Lindsay whom he loved with all his heart, his father Allan E. Wright, Sr. and his wife, Cindy, his brother, Allan E. Wright, Jr. and his wife Lori of Lee, his beloved mother in-law Nancy Osgood of Hampton, his sisters-in-law Melinda Nyberg of Dover, Tammy Whitehouse and husband Scott of Strafford and his brother-in-law Timothy Osgood of Strafford, his niece Britta Nyberg and his nephews Casey Nyberg, Cameron and Samuel Whitehouse, his uncles and aunts. Ralph and Ruth Gero, Steve and Tammy Gero, Dave and Mary Dufresne, Donna Jean Wright, Elizabeth Martin, Debra Lachance, Darla Wright Rivera, Paul Wright and many loved cousins. Additionally, Jeff leaves his beloved childhood friends, Melissa Hendry and Michael Tishko, his hunting buddies John Anthony Simmons, David Cote, Adam Stocker, and Robert Lang and his fishing buddy Richard "Rico" Syphers. Jeff was a devoted husband, father and friend. Someone who was always there for you. He was a kind, generous soul who lived his life everyday to the fullest with no regrets. All services will be private. Arrangements are by the Remick & Gendron Funeral Home - Crematory, Hampton. In lieu of flowers, donations may be made to: The Wright Family Trust Fund c/o Tammy Whitehouse P.O. Box 167, Strafford NH 03884 or the American Cancer Society.

Strafford &#8211; Jefferson M. Wright, 48, of Strafford and formerly of North Hampton, passed away suddenly on Tuesday, May 9, 2017 at the Exeter Hospital. He was born in Rochester on November 7, 1968, the son of Allan E. Wright, Sr. of Northwood... View Obituary & Service Information

The family of Jefferson M. Wright created this Life Tributes page to make it easy to share your memories.