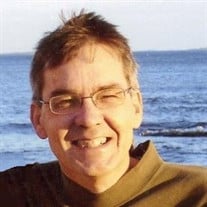 North Hampton – Jeffrey Scott Bednarz, 51, following a period of declining health, died suddenly at home on Saturday, March 26, 2016. He was born in Exeter, NH to Stanley and Barbara (Fil) Bednarz of North Hampton. Jeff was the youngest of two children and graduated from Winnacunnet High in 1983. Jeff went on to earn his B.A. Degree in Business Administration and Philosophy from Colby College in 1987. Jeff was competitive, talented and passionate. During his school years, Jeff played many sports, but soccer was by far his most favorite. His love of soccer continued long after his playing days ended. He was a fervent Columbus Crew team fan and frequently spent happy days attending their games and events. Jeff spent many days on the slopes of New England ski areas with friends and family. He also enjoyed an occasional day on the golf course or out fishing trying to "catch the big one". Jeff's talents extended beyond sports. He loved listening to and playing music. His trumpet playing entertained many people through music programs in the schools he attended and playing in local bands. Never one to shy away from a conversation, Jeff also had a talent for storytelling and debating but especially debating. Friends, family members, and the occasional stranger participated in philosophical discussions and lively exchanges with Jeff often lasting into the early morning hours. Jeff’s passion was displayed in many ways. He cared about our environment and especially the seacoast where he lived. He was happiest on the beach and volunteered with several environmental service projects dedicated to the health of New Hampshire beaches. A diabetic since age 8, Jeff followed the search for better treatment and the hope for a cure and was quick to share his experience with others. Following his cancer diagnosis, Jeff meticulously investigated his treatment options and was an active decision maker in his treatment plan. Most of all, Jeff was passionate about living his life on his own terms. In addition to his parents, Jeff is survived by his brother John Bednarz and his wife Terri and niece, Natalie of Raleigh, NC. Many loving aunts, uncles, cousins, and friends will miss Jeff's joyful presence. The family will welcome guests on Monday, April 4 from 11 am to 1 pm in the Remick and Gendron Funeral Home – Crematory, 811 Lafayette Rd., Hampton. A Prayer Service will follow the visitation beginning at 1 pm at the funeral home. Following the service, interment will be at the Center Cemetery, North Hampton. Family flowers only please. In lieu of flowers, donations are welcome in Jeff’s name to the American Diabetes Association, 10 Speen Street- Second Floor, Framingham, MA 01701.

The family of Jeffrey Scott Bednarz created this Life Tributes page to make it easy to share your memories.