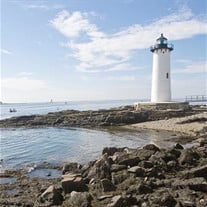 North Hampton – Jeffrey S. Knowles, 58, of North Hampton, died Wednesday, December 14, 2016 at Massachusetts General Hospital in Boston, Mass., surrounded by his family after a lengthy battle with cancer. He was born October 18, 1958 a son of Nina M. (Dunbrack) Knowles of North Hampton and the late Stanley W. Knowles. Jeff was raised and attended schools in North Hampton and graduated from Winnacunnet High School with the Class of 1976. He attended the University of New Hampshire and in 1999 founded Knowles Ground Maintenance, Inc. Jeff owned and operated the business until illness prevented him to continue and in 2014 he sold the business. Family was most important and more recently he became a grandfather and his granddaughter Scarlett was the light of his life. He had a passion for fishing and enjoyed playing golf. He shared 37 years of marriage with his loving wife, Kathleen A. (Johnston) Knowles. In addition to his wife and mother, he leaves two sons, Daniel Knowles and his wife Marissa and their daughter Scarlett of Exeter, Christopher Knowles of New York, NY, two brothers, Eric and Donald Knowles, his sister, Teresa Fredette and her husband Charles all of North Hampton, nieces, nephews, aunts, uncles and cousins. Visiting hours will be from 5-8 P.M. Tuesday, December 20, 2016 at the Remick & Gendron Funeral Home-Crematory, 811 Lafayette Road, Hampton. A celebration of life service will be held at 11 A.M. Wednesday, December 21, 2016 at the United Church of Christ, 295 Atlantic Avenue, North Hampton. In lieu of flowers donations may be made to the American Cancer Society, PO Box 22478, Oklahoma City, OK 73123 https://donate3.cancer.org/. Relatives and friends are respectfully invited.

The family of Jeffrey S. Knowles created this Life Tributes page to make it easy to share your memories.