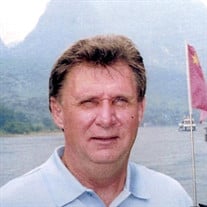 North Hampton – Jeffrey Thomas McClure, 74, of North Hampton, passed away peacefully on Monday, July 5, 2021, at his second home in Alexandria, VA. He was born in Schenectady, NY, on June 16, 1947, a son of the late Thomas and Antoinette (Karis) McClure. Jeff shared nearly 40 years of marriage with his beloved wife, Cynthia (Cummings) McClure. Jeff was raised in Schenectady. After graduating from high school, he earned his Bachelor’s Degree in Civil Engineering from Northeastern University. Following graduation, he worked for the State of New York, Parks and Recreation Department for 12 years. He then took a position with Saudi Arabian Parsons LTD, an engineering firm based in California. While with S.A.P.L, Jeff lived and worked in Saudi Arabia for eight years as a senior project manager for the development of the Industrial City, Yanbu, Saudi Arabia, providing services to the Royal Commission for Jubail and Yanbu, Saudi Arabia. As senior project manager, he was responsible for delivering programs in a wide range of industry fields: defense and security, roads, bridges, and other multi-billion-dollar mixed use projects. After eight years with S.A.P.L., he and Cynthia relocated to North Hampton. Jeff was then employed with AECOM and served as senior project manager on the Boston Harbor Project. Following the completion of that project, he became senior program director for AECOM’s water treatment project in Washington, DC. He stayed with AECOM up until his passing. Jeff traveled the world for his work, but being at home along the New Hampshire seacoast with his family was always the most important part of his life. He enjoyed taking care of his home and property in North Hampton, especially caring for the wildlife that lived nearby. In addition to his beloved Cynthia, Jeff is survived by his son, Ryan McClure of Washington, DC, and his niece, Laurie Dennis of Niskayuna, NY. A Mass of Christian Burial will be celebrated at 11 AM on Monday, August 2, 2021, at St. Theresa Parish Church, 815 Central Road, Rye Beach. Burial will follow in the Center Cemetery, North Hampton. The Mass will be live-streamed for those that can not attend in person. Click St. Theresa Live-Stream to watch.

North Hampton &#8211; Jeffrey Thomas McClure, 74, of North Hampton, passed away peacefully on Monday, July 5, 2021, at his second home in Alexandria, VA. He was born in Schenectady, NY, on June 16, 1947, a son of the late Thomas and Antoinette... View Obituary & Service Information

The family of Jeffrey T. McClure created this Life Tributes page to make it easy to share your memories.

Send flowers to the McClure family.