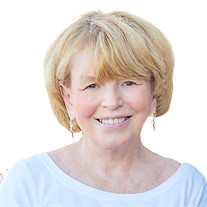 Hampton, NH - Jeraldine “Jerri” Ann Twomey, 74, of Hampton NH, and a former resident of Andover MA, passed away peacefully on Wednesday, August 2, 2017. She was born in Lawrence, MA on February 12, 1943, the daughter of the late Dr. Victor and Elsie (Dube) Judson. Jerri was raised in Methuen, MA and graduated from St. Mary’s High School. She went on to earn her nursing diploma from the former Catherine Labouré School of Nursing of Milton, MA where she made lifelong friends. Many of her most cherished memories were made in Plaice Cove NH, where she spent time both as a young child and returned every summer with her own family. She is survived by Michael J. Twomey, her beloved husband of 52 years, and her children, Jennifer Twomey, John Twomey and his wife Hallie and Brian Twomey. She also leaves behind brothers and sisters-in-law John and Margaret Judson and Jeffery and Donna Judson, her grandchildren Connor, Ethan, Gabby and Matias, and her much doted upon dog Sadie. Jerri was predeceased by her grandson CJ. Visitation will be from 10am to 12pm on Tuesday, August 8, 2017 in the Remick & Gendron Funeral Home - 811 Lafayette Rd., Hampton. A prayer service will be held at 12pm in the funeral home with burial to follow in the West Parish Cemetery, 129 Reservation Rd., Andover, MA. If desired, the family suggests donations to New England Donor Services, 60 First Avenue, Waltham, MA 02451.

The family of Jeraldine "Jerri" Twomey created this Life Tributes page to make it easy to share your memories.

Send flowers to the Twomey family.