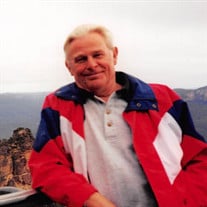 Hampton - Jere Allen, 80, of Hampton, passed away peacefully on Monday, January 28, surrounded by his loving family. Born in Spencer, Massachusetts, Jere graduated from Worcester Academy in 1955. He then went to Paul Smiths College in NY. Upon graduation he enlisted in the Army Reserves, where he was stationed in El Paso, Texas. After his military service he attended and graduated from the University of New Hampshire, attaining two Masters’ degrees. Jere began his teaching career at the Emerson School in Exeter. He then taught science at Timberlane High School and at Triton Regional High School in Byfield, Massachusetts. Using his science background, Jere embarked on a new career in the field of nuclear power. He was vice-president of VIKEM Industries (which later became Enpro Services). Jere and the VIKEM crew were one of the first on the scene at Three Mile Island in 1979. After retiring from the environmental consulting business, he went to work for Regal Limousine. In 2006 he and his wife Linda both retired and began traveling the world. They visited six continents and 60 countries. Jere was an avid reader, enjoyed time with his friends and family, and most recently was a volunteer at the Seacoast Science Center, returning to his love of science and nature. But his greatest passion was playing golf. He was a member of several leagues at Sagamore Golf Course and he truly enjoyed being on the links with his longtime Sunday foursome. Jere is survived by his wife of 40 years Linda (Mercaldi); his brother Tim and wife Carol of North Carolina; his brother David and wife Donna of Vermont; and his sister Phebe Gustavson and husband Wayne of New York. He was predeceased by his sister Martha Simmerer of Massachusetts. Jere also leaves his loving son Brad and loving daughter-in-law Susan of Center Harbor, New Hampshire and his loving daughter Meredith Odum of Fayetteville, Georgia. In addition he leaves five grandchildren: Stephanie (Allen) Howell of Brisbane, Australia; Christian Allen of Center Harbor, New Hampshire; Zachary, Jacob, and Meaghan Odum of Fayetteville, Georgia, as well as several nieces and nephews. A private family service will be held in the spring. In lieu of traditional remembrances please honor Jere with a donation to the American Lung Association, National Direct Response Headquarters, 1200 Hosford Street, Suite 101 Hudson, WI 54016-9316.

Hampton - Jere Allen, 80, of Hampton, passed away peacefully on Monday, January 28, surrounded by his loving family. Born in Spencer, Massachusetts, Jere graduated from Worcester Academy in 1955. He then went to Paul Smiths College in NY.... View Obituary & Service Information

The family of Jere Allen created this Life Tributes page to make it easy to share your memories.

Send flowers to the Allen family.