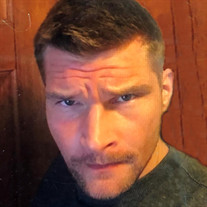 Hampton Falls – Jeremy V. Boyd, 33, of Hampton Falls, died on Wednesday, January 2, 2019 at his home. He was born in Newburyport, MA on March 26, 1985 a son of Venus Chase of Hampton Falls and the late Stanley V. Boyd. Raised in Hampton Falls, he graduated from Winnacunnet High School and currently worked as a plumber for MP Mechanical Plumbing & Heating in Chelsea, MA. Jeremy was intelligent and wise beyond his years, an amazing artist, and devoted Red Sox and Pats fan, who enjoyed fishing, music and going to concerts. He also loved animals and they were drawn to his soul. He loved and adored his family and friends and once you were in his heart, that’s where you stood for life. Jeremy did not judge and did not want to be judged and one of his favorite quotes was “We are already what we are trying to become”. He will be remembered for his wonderful sense of humor and will be loved and missed by his family and friends; they find comfort knowing he is at peace and watching over us, rest in peace. In addition to his mother Venus, surviving family members include his brother Ricky Merrill III of Hampton Falls; grandparents, Gayle and Charlie Smith of Newburyport, MA; uncle Walter Chase of Greenland; aunts, Mariam Eaton and her partner Alwin and Patricia Connelly of Newburyport, MA; cousins, Andrew Eaton of Seabrook and Alwin Eaton III of North Glen, CO and Richard Merrill Jr. of Hampton Falls. In addition to his father Stanley, he was predeceased by his grandparents, Cathy and Charlie Chase and uncles, Chuck and Robert Chase. All services will be private. In lieu of flowers donations may be made to the Wenham House, 76 Topsfield Road, Wenham, Massachusetts 01984.

The family of Jeremy V. Boyd created this Life Tributes page to make it easy to share your memories.

Send flowers to the Boyd family.