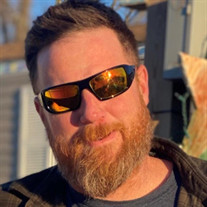 Newport News, VA - Jeremy Wasson of Newport News, died unexpectedly in San Diego, CA while on an out of state work assignment. He was born on September 26, 1977 in Exeter, NH, the son of the late Susan Cicirelli and Raymond “Delly” Wasson. Jeremy was raised on the seacoast of NH. He graduated aircraft mechanic school and worked with a lot of great companies as a private contractor for the government. He enjoyed his work and was able to travel around the world doing it. He has resided in Virginia for the past 15 years, where he planted his family roots. Raising his two daughters, Theresa and Olivia Wasson, who he loved spending his time with. Most recently, he and his wife Caitlyn Wasson, are expecting another baby girl due this December. Jeremy had the pleasure of being a step-father to Leo Fowler and Olivia Call who he also adored and cared for as his own. Jeremy enjoyed adventure. He loved to fish, skydive, ride his Harley and was always full of life, and always making jokes trying to get everyone laughing. But what he loved most was his family. Jeremy brought smiles and laughter to all those around him. Jeremy leaves behind his wife, Caitlyn Wasson, who is pregnant with their new daughter, due this December, his two daughters Theresa and Olivia Wasson, his step-children Leo Fowler and Olivia Call, his three brothers Sean Randall, John Wasson and Andrew Goodness, his uncle and aunts, Tom and Diane Wasson, Eddie and Evie Wasson and Barbara (Wasson) Randall and several other of his aunts, uncles, cousins, and friends in whom he was very close with. In addition to his parents, he was predeceased by his brother Mark Randall, his sister Adele Gosselin, his cousin Tommy Randall and his uncles, Stephen Cicirelli and Daniel Dobson. Visiting hours will be held from 2 to 4 PM on Monday, August 16, 2021 in the Remick & Gendron Funeral Home. In Lieu of flowers you may give donations for his surviving wife and children. https://gofund.me/8d2b7162

Newport News, VA - Jeremy Wasson of Newport News, died unexpectedly in San Diego, CA while on an out of state work assignment. He was born on September 26, 1977 in Exeter, NH, the son of the late Susan Cicirelli and Raymond &#8220;Delly&#8221;... View Obituary & Service Information

The family of Jeremy Wasson created this Life Tributes page to make it easy to share your memories.

Send flowers to the Wasson family.