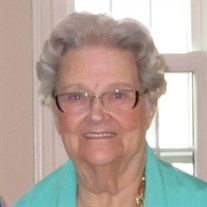 Jerry Lou (Cook) Potter went to be with her husband, Harold Clayton Potter, in their heavenly home, on Jan. 25, 2016. Her devotion to her family and her firm belief in God supported her and gave her peace. Jerry was the daughter of Eustace B. Cook and Mary Katheryn (Davis) Cook. She was born Oct. 29, 1932, in Unionville, Mo., and graduated from Unionville High School in 1950. Jerry joined the Women’s Army Air Corps (WAC) from 1950-52 and was a corporal at Fort Sam Houston, Texas, as a medic for the 101st Airborne Division. In 1954, she married Harold C. Potter, a staff sergeant in the United States Air Force. They had three children, Frances Kathryne “Kathy,” Bruce Edward and Fredrick “Rick” Clayton. She worked in the Department of Defense at Fort Richardson in Anchorage, Alaska; Loring Air Force Base in Limestone, Maine; Camp Kue in Okinawa, Japan; Dover Air Force Base in Dover, Del.; and Fort Dix in Trenton, N.J. When Harold retired from the Air Force, they moved to Merrimac, Mass. Jerry worked for the IRS, retiring in 1996. She also took classes for sign language and enjoyed signing for her church services, where she also taught Bible class for more than 25 years. She liked reading, sewing, going out to eat and watching movies. She was Great Aunt Tilly and Yak Yak the clown and face painter and Zelda the Gypsy Storyteller. Her great joy was playing with her great-grandchildren, all EIGHT! Jerry Lou will be loved and missed by her daughter and son-in-law, Kathryne (Potter) and Jeff Buhl, of Springfield, Mass.; her two sons and two daughters-in-law, Bruce and his wife, Deborah, of Merrimac, Mass., and Fredrick and his wife, Karen, of Nashua, N.H.; her eight grandchildren, Tanya (Austin) and her husband, Ed Regna; Katrina (Austin) and her husband, Ryan Cook; Thomas and his wife, Jennyfer Deister; Elisabeth (Potter) and her husband, Denis Francis; Tina (Potter) and her husband, Michael Maneiro; Daniel Potter; Hilary (Potter) and her husband, Michael Childs; and John Potter; her eight great-grandchildren, Craig Jr “CJ,” Anthony, Abigail, Fallon, Grady, Caleb, Emma and Mackenzie; and her brother, Don Cook, and his wife, Myrna. There will be a memorial gathering; March 30, 2016, from 6 to 8, at her home church, The Church of Christ in Seabrook, N.H. There will be no formal services. The family is grateful for the condolences, but declines flowers. However, donations may be made in her name to The Church of Christ (memo: Food Pantry – Jerry Potter) at 867 Lafayette Road, Seabrook, NH 03874.

Jerry Lou (Cook) Potter went to be with her husband, Harold Clayton Potter, in their heavenly home, on Jan. 25, 2016. Her devotion to her family and her firm belief in God supported her and gave her peace. Jerry was the daughter of Eustace... View Obituary & Service Information

The family of Jerry Lou Potter created this Life Tributes page to make it easy to share your memories.

Jerry Lou (Cook) Potter went to be with her husband, Harold Clayton...