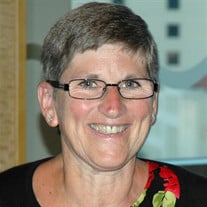 Stratham - Jeryl Klumpp Bacon, 64, of Stratham, died on Thursday, October 12, 2017 at the Hyder Family Hospice House in Dover, surrounded by her loving family after a long and courageous battle with ovarian cancer. Jeryl was diagnosed in 2010 and throughout her seven year battle she was an amazing force, who fought to overcome obstacle after obstacle. She was brave, iron-willed, and an inspiration to all who knew her and she remained determined to fight the disease up until the end. She leaves behind her husband, R. Scott Bacon of Stratham; her son, Matthew Bacon and his wife Stefanie of Burke, VA; her daughter, Erin Harris and her husband Sean, and their son, Evan all of Simsbury, CT. Jeryl was born on July 15, 1953 in Queens, NY, a daughter of the late Roy Jay Klumpp and Theresa Scherr Klumpp. She grew up the middle child, in a small loving family, with one older sister and one younger brother. The family moved to Amherst, NH in 1958 and became permanent residents. Jeryl was a graduate of Milford Area Senior High School in 1971, and earned her Bachelor’s degree in elementary education from Keene State College in 1975. After college she worked for several years as a sixth grade teacher at Amherst Middle School before deciding to devote her full attention to starting and raising a family. She was a proud, devoted, and loving mother to her two children, and was loved and admired by her husband of 41 years. Jeryl was first and foremost a selfless individual, always putting others ahead of herself right up until her passing. Family was the most important element of Jeryl’s life, and when she was with family, that was when she was happiest, be it at her home in Florida during the winter months or at the family home on Martha’s Vineyard during the summer. That is what made her life whole and fulfilling, followed closely by her love of longtime family friends who she would often visit, go out shopping, or grab a meal with. Then there was her love of New England sports teams. Of them all, the Red Sox held the special place in her heart. She followed them with avid passion. She was also a fan of Dunkin Donuts and could often be found there at least once, if not twice a day, drinking her favorite iced tea and having a bagel or a white powdered donut. In addition to her husband, her children, their spouses, and her grandson, she is survived by her sister, Denise Paradis, and her niece, Jaime Palmer of Amherst, NH; her brother, Kevin Klumpp and his wife Barbara, and her nephew Joshua of Milford, NH; her mother-in-law, Nancy Bacon of Bonita Springs, FL; her sister-in-law, Heidi (Bacon) Violette and her husband Michael, and her niece Micaela and nephew Tyler of Amherst, NH; and her sister-in-law, Holly Bacon of Bonita Springs, FL. Jeryl also cherished her extended family of aunts, uncles, and cousins, and they know who they are. In addition to her parents, she was predeceased by her father-in-law, Robert L. Bacon. The family would especially like to thank Dr. Bruce Bartolini of Core Physicians; Drs. John Schorge, Richard Penson, and William Curry of Massachusetts General Hospital; and all the nurses and staff of the MGH Cancer Center and Phillips 21 for the excellent care they provided Jeryl during her protracted battle. They would also like to thank the staff of the Hyder Family Hospice House for the loving care that they provided to Jeryl during her final hours. Calling hours will be held from 2 to 4 PM on Tuesday, October 17, 2017 in the Remick & Gendron Funeral Home – Crematory, 811 Lafayette Rd., Hampton. Services will immediately follow the visitation at 4 PM in the funeral home. Relatives and friends are respectfully invited. Burial will be private. In lieu of flowers, gifts in memory of Jeryl may be made in support of The Jeryl K. Bacon Ovarian Cancer Research Fund. Checks may be made out to Massachusetts General Hospital c/o Development Office, Attn: Erin MacAdam, 125 Nashua Street, Suite 540, Boston, MA 02114. For the checks, please note on the memo line “In Memory of Jeryl K. Bacon” or in an accompanying note. For donors who would like to make gifts online via credit card, please visit www.giving.massgeneral.org/. This will take donors right to the online form. At the bottom of the form, donors will have the ability to designate the gift in memory of Jeryl K. Bacon in the "Tribute Information" section.

Stratham - Jeryl Klumpp Bacon, 64, of Stratham, died on Thursday, October 12, 2017 at the Hyder Family Hospice House in Dover, surrounded by her loving family after a long and courageous battle with ovarian cancer. Jeryl was diagnosed in 2010... View Obituary & Service Information

The family of Jeryl Klumpp Bacon created this Life Tributes page to make it easy to share your memories.

Send flowers to the Bacon family.