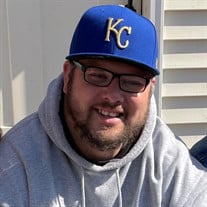 Hampton---Jesse Ronald Thomas Simons passed away May 31st, 2021 at the age of 34. He was born on May 3rd, 1987, in Portsmouth, New Hampshire. Jesse was full of life. His happiness was contagious. He handled even the toughest situations with a positive outlook, a joke, and a smile. Jesse was a gentle giant, but a fierce protector of those he loved. When Jesse gave you a hug, you instantly felt everything was going to be okay. Jesse truly appreciated each and every day. He loved the people in his life. His family and friends were always number one. Since Jesse was young, he has always enjoyed helping people and would go out of his way for someone who needed him, no questions asked. Jesse loved music, and his beats headphones were his favorite accessory. When Jesse wasn’t working construction, he was with his family. He was an incredibly devoted Father, and could be found every Saturday in the YMCA pool with his daughter Stella, for swimming lessons. He could not have been a more hands-on dad. He was truly a family man, and his children were everything to him. Jesse’s true passion was fishing—he cherished the times when he worked on boats. For him there was so much beauty and peace to be found out at sea. Jesse also enjoyed traveling the country with his friends while working for Servpro in his 20’s, and often brought up the fond memories that were made in those years. Jesse will be so incredibly missed. He leaves behind his beloved Father Michael and his loving Mother Carol, with whom he shared an extremely special bond. He was her “Jesse boy”. Jesse is also survived by his fiancé Nicole, and their children Stella and Houston, who were Jesse’s entire world; his siblings Michelle and Crystal, many nieces and nephews, aunts, uncles, cousins, and friends. While Jesse leaves behind so many loved ones, he is finally reunited with his brother Shawn. We appreciate so much everyone’s condolences, support, and the happy memories you have shared. Private family services to follow.

Hampton---Jesse Ronald Thomas Simons passed away May 31st, 2021 at the age of 34. He was born on May 3rd, 1987, in Portsmouth, New Hampshire. Jesse was full of life. His happiness was contagious. He handled even the toughest situations with... View Obituary & Service Information

The family of Jesse R.T. Simons created this Life Tributes page to make it easy to share your memories.

Send flowers to the Simons family.