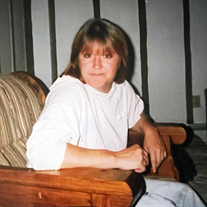 Seabrook - Jill Kathleen Follansbee was born in Exeter, New Hampshire on September 15, 1966. Her middle name was chosen by her mother's grandfather from the song “Take Me Home Again Kathleen” by Bing Crosby, which he very much loved. Jill was held back in preschool for two years due to being so much smaller than the other children. Her parents started bringing Jill to church around the age of three which continued as she got older. Jill loved reading her bible when she was young. Her mother and father, Judith and Edward, would bring Jill and her older brother Mark snowmobiling a lot in the winter when they were around the ages of six and seven years old. They would stay up and sit around the fire with lots of friends and family as well as go out to eat quite often. Judith met and got remarried to George McKinney 1975. That same year they moved to the Air Force base. There was a lot to do on the base like movie theaters, bowling, and other fun activities she and her brother would do together. On the weekend her father would pick up her and Mark to visit, which she loved because she got to see her grandparents. She loved her grandmother very much. She and Mark would “run away” to their grandparents that lived just across the street on Rocks Road. She talked a lot about how great a grandmother she had, even in her adult years. Growing up, Jill and Mark were very close. They were each other’s best friends. From playing on their childhood street with all their friends that lived nearby, to playing in what felt like endless woods by their home. The family did a lot of moving around, switching schools so often made making friends difficult for her and Mark. In 1978 her sister was born Jennifer Erin McKinney. Jill, being 12 years old at this time, was excited to be a big sister. Her and Mark were like her mini parents. They liked feeding and helped put her to bed. They loved pushing Jennifer in a laundry basket full of clothes in the living room. Judith would hear them laughing and giggling all the time. At 13 years old her mother and George bought her a horse that she named Gem. He was Buckskin that was the same age as her. She loved him unconditionally. She started out slow by going to 4H with him and then later competed in horse shows. Jill would always come in 1st or 2nd place, consistently bringing home ribbons and trophies that she would store in a tack box that she hand made in her high school wood working class. Sadly Jill was heartbroken at the fact she had to leave her horse Gem in New Hampshire while she moved with her family to Florida in 1981. Jill's mother, brother, sister and George moved back to New Hampshire in 1985 while she stayed in Florida with her boyfriend at the time. She visited twice to see her family before she met Derek, her future husband, in Florida in 1994 at "Billie’s Pub" where she was a bartender. She had her first daughter, Katelyn Taylor Heap, in February of 1996 at the age of 30. Nine months later they moved their little family back to Jill's childhood street on Rocks Road in Seabrook for a short time then moved to Haverhill, MA around two years later. At the age of 34, Jill and Derek had their second daughter, Brooke Jorie Heap, in November of 1999. As Jill and Derek’s family grew, they decided to move back to Rocks Road and into the house her grandparents lived in that her father, Edward, built which still stands to this day. Jill loved the warmer days of the year, never being a fan of the cold, and would always be seen in a sweater or jacket. She developed a blanket collection because of how many she had been gifted over the years. Jill loved to plant flowers around the house and would wait for the lilacs to be fully in bloom before collecting them to fill vases that she would put around the house. She loved to go camping with her family of four almost as much as she loved her soap operas. "The Bold and the Beautiful" and "The Young and the Restless" were among her favorites. Her all-time favorite TV show, had to be “Emergency” because she had a crush on one of the main characters, Randolph Mantooth. Although she was looked at as a small and fragile lady she was strong and always pulled through in the worst of times. When her health wasn’t at its’ best, she would always come out on top. She was indestructible in her children's eyes. Her strength and love of animals was a trait passed on to both her daughters. Katelyn, her oldest, took on her love for horses and now has one of her own. Her youngest, Brooke, owns almost sixty chickens and somehow knows each and every one of their names. Other than passing on her love for animals, Jill always taught her daughters to be strong willed and to always look on the bright side of things. She was always there for them when they just needed someone to talk to; from watching them get off the bus from elementary school to seeing them graduate high school, Jill was always there for them. She passed away on May 3, 2022, surrounded by her loving family. She is now pain free and in the Lord’s care. Jill will be forever missed and never forgotten. Family and friends may visit at the Remick & Gendron Funeral Home from 2 to 3 PM on Thursday, May 12, 2022. Burial will be private.

Seabrook - Jill Kathleen Follansbee was born in Exeter, New Hampshire on September 15, 1966. Her middle name was chosen by her mother's grandfather from the song &#8220;Take Me Home Again Kathleen&#8221; by Bing Crosby, which he very much loved. Jill... View Obituary & Service Information

The family of Jill Kathleen Heap created this Life Tributes page to make it easy to share your memories.

Send flowers to the Heap family.