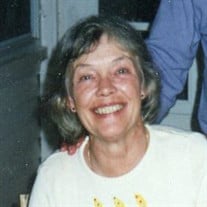 Exeter - Joan Beth Marcotte Fuller’s eighty eight years came to a quiet and peaceful end in the early hours of June 19th, after being blessed by excellent care received from the nurses of Langdon Place in Exeter for the past seven years. She was the eldest daughter of Dr. Raymond H. Marcotte and Elizabeth L. Mahon, (Ray and Betty,) from Nashua and North Hampton, NH. Joan Beth is predeceased by her husband Peter Davenport Fuller, her brother Raymond H. Marcotte Jr., (Biff,) her sister Sally A. Marcotte, and her grandson Paul Sean Fuller-Porter. Joan Beth leaves behind her sisters Mary Jane McFarland and Gayle Mellin, as well as her eight children: Mindy Fuller Bocko and her husband Stan, Sandy Fuller Bocko, Suzi Fuller MacDonald, Peter D. Fuller Jr. and his wife Kathy, Abby J. Fuller, Jessy L. Fuller, Charlotte I. Fuller, and Michelle M. Fuller. She also leaves eighteen grandchildren and six great grandchildren, with one more on the way! Joan Beth attended Notre Dame Academy in Tyngsborough, MA, High Mowing School in Wilton NH, Bennington College in Vermont, and Garland College in Boston. Many youthful summers were spent at Teelawooket Camp, where Joan Beth enjoyed swimming, horseback riding, and honing her considerable artistic skills. An eye for fashion, design, and all things beautiful came together with Joan Beth’s desire to always lend a hand to those less fortunate, resulting in many fundraising parties hosted in either the couple’s beautifully appointed winter or summer residence. In the Boston area the beneficiaries of these events and Joan Beth’s membership included The Vincent Club, Boston City Hospital, The Women’s Education and Industrial Union, The Elma Lewis School, The Boston Pops and many more. In the New Hampshire Seacoast area Joan Beth favored both the Exeter Hospital and the Richie McFarland Children’s Center, established in honor of her sister’s deceased special needs son. These two organizations were the focus of over a decade of annual summer galas held under a big white tent on the front lawn of Peter and Joan’s seaside home, Lea House. The Exeter Hospital Fashion show and luncheon was the highlight of the summer for many, drawing a crowd from near and far. Following was an evening event, “After a Fashion”, where the models’ raised runway was replaced by an ample dance floor to suit the crowd eager to enjoy live music. Both enthusiastic, energetic dancers, it was a pleasure to watch Joan Beth and her husband Peter playfully kick up their heels in celebration of a lively beat. The front lawn also served as a softball field for the many summer games enjoyed by her family and their friends. Another passion was heading off to the races to watch one of her husband’s thoroughbreds round the course, often resulting in a trip to the winner’s circle! Other summer days you might have found Joan Beth at Abenaqui Country Club in a fierce battle on the tennis courts, or afterwards gracefully backstroking through the Beach Club pool. Her involvement with the Rye Beach Little Boar’s Head Garden Club resulted in a trip out to the Isles of Shoals, where she and other members worked on restoring Celia Thaxter’s garden. An avid lifelong Democrat, Joan Beth also took delight in engaging in political debates with any willing to ‘go there’ with her. Supporting equal rights for all was a cause very close to her heart, as was having her large crew come together, in later years with their children in tow, for Sunday dinners and holiday festivities. Her serious, intellectual side was balanced by the ability to dissolve into a fit of laughter when her funny bone was tickled. We trust now Joan Beth is now enjoying the greatest celebration and home coming of all! Visiting hours will be held from 4:30 to 7:30 pm on Thursday, June 22, 2017 in the Remick & Gendron Funeral Home – Crematory, 811 Lafayette Rd., Hampton, NH. A Mass of Christian Burial will be celebrated at 10 am on Friday at the St. Theresa Parish Church, 815 Central Rd., Rye Beach, NH 03870. Burial will be in the Central Cemetery, Rye. In lieu of flowers donations can be made to the Richie McFarland Children’s Center, 11 Sandy Point Road, Stratham, NH 03885 or the Southern Poverty Law Center, 400 Washington Ave. Montgomery, AL 36104. Please visit www.RemickGendron.com to view Joan Beth’s memorial website, to sign her tribute wall or for directions.

Exeter - Joan Beth Marcotte Fuller&#8217;s eighty eight years came to a quiet and peaceful end in the early hours of June 19th, after being blessed by excellent care received from the nurses of Langdon Place in Exeter for the past seven years. She... View Obituary & Service Information

The family of Joan Beth Marcotte Fuller created this Life Tributes page to make it easy to share your memories.

Send flowers to the Fuller family.