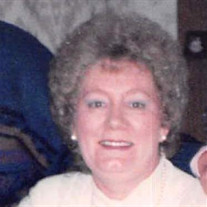 Seabrook—Joan E. (Sumner) Connor, AKA “Queen Mum,” 79, passed away peacefully on Wednesday, September 25, 2019 at her home with loving family at her side. Joan was born in Mundesley, England on April 22, 1940. In 1961 Joan married Richard Sumner, an airman with the USAF, and subsequently relocated to Franklin, NH to raise a family. Joan began working as a lunch lady for Franklin High School, then later worked at JJ Newbury’s and became known as the “Fabric Lady.” Joan eventually started as a receptionist for The Merrimack County Nursing Home in 1983. She met the love of her life, Paul Connor, and they were married in 1989. Joan and Paul loved their frequent travels to Ireland and would reminisce with many stories of their trips. In 1998, she retired with over 18 years of service at the nursing home. Joan was widowed in 1999 and not a day went by that she didn’t miss or speak of their love. Over the years Joan lived in several towns and finally settled in Seabrook in 2017 to be near the ocean breeze. She spent her days by the ocean, viewing and sketching the Nubble Lighthouse and other scenic spots around New England. Joan loved her puzzles and had an enormous collection. She really enjoyed a challenging game of scrabble and spent lots of time knitting and sewing. Most of all, Joan loved her black pug Rube and her cat Opie. Joan is survived by her three children: Marina Sumner of Tilton, Kevin Sumner and his wife Sharon of Lawrence MA, and Heather Da Costa and her husband Fernando of Lawrence, MA, her four stepchildren: John Connor of Webster, Michael Connor of Lakewood, NJ, Sue Brooks of Rapine, NJ, and Wendy Connor of Plymouth MA, her grandchildren: Rhiannon Sumner of Lawrence, MA, Spencer Pickering of Laconia and Samantha Abear of Belmont and her two great grandchildren Aaliyah and Lincoln, also of Belmont. She also leaves her brother Tony Jay of Battle, England along with many nieces and nephews in England and NH. She was predeceased by her brother Eric Jay and granddaughter Natalie Sumner. The family of Joan Connor would like to express gratitude and appreciation to the Seabrook Fire Department, and our amazing caring neighbors, Debbie and Ed of Seabrook. A very special thank you to Rhonda for all the unconditional love and support you provided. A Celebration of Life will be held at 11 AM on Saturday, October 19, 2019 at the Red Blazer Restaurant, 72 Manchester St. Concord, NH 03301. In lieu of flowers donations can be made to the Lakeside Animal Hospital 552 Laconia Rd, Tilton, NH 03276 or to the American Diabetes Association.

The family of Joan E. Connor created this Life Tributes page to make it easy to share your memories.

Send flowers to the Connor family.