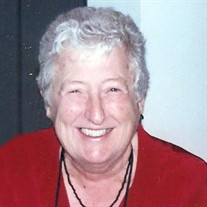 Seabrook - Joan P. (McGurren) Morrison, a long-time resident of Seabrook, NH passed away peacefully at the age of 89 on March 21, 2022. She was predeceased by her beloved husband Joseph “Rocky” Morrison. Joan was born on June 29, 1932, one of 5 children of the late William and Minna (Gaudet) McGurren of Lawrence, MA. Joan was raised in Lawrence and attended the Lawrence schools, graduating from Lawrence High in 1949. She was employed at the former Sutherlands Department Store, before leaving to marry and raise a family. Joan was married to the love of her life, the late Joseph “Rocky” Morrison for 56 years. They raised 5 children in Lawrence, MA before retiring to Seabrook. Joan loved to cook and could often be found watching cooking shows on TV or poring over the latest cooking magazine. She and her husband enjoyed travel and would spend several months per year in Cocoa Beach, FL. She leaves behind her grateful and loving children: Terence Morrison and his wife Linda of Hampton Beach, NH, Judith (Morrison) Arciero of Vero Beach, FL, Marianne Morrison of Hampton Beach, NH, Rita Morrison Burke and her husband Kevin Burke of Methuen, MA and Christopher Morrison and his wife Irene Collins of Hampton Beach, NH. She also leaves behind 5 grandchildren: TJ Morrison of Portsmouth, NH, Kasey (Morrison) Bemis and her husband Scott Bemis of Manchester, NH, Shauna Morrison of Washington, DC, Joseph Morrison Burke of Methuen, MA and Jillian Shea and her husband Tom Shea of Hampton Beach, NH and her one great grandchild Andrew Shea of Hampton Beach, NH. In addition, she leaves behind a multitude of very dear nieces and nephews. Visiting hours will be from 1 to 4 PM on Sunday, March 27, 2022 in the Remick & Gendron Funeral Home – Crematory, 811 Lafayette Rd., Hampton. A Mass of Christian burial will be celebrated at 10 AM on Monday at St. Michael’s Church, 9 Lincoln Street, Exeter, NH 03833. Burial will be private. In lieu of flowers the family asks that donations be made to the Juvenile Diabetes Fund.

Seabrook - Joan P. (McGurren) Morrison, a long-time resident of Seabrook, NH passed away peacefully at the age of 89 on March 21, 2022. She was predeceased by her beloved husband Joseph &#8220;Rocky&#8221; Morrison. Joan was born on June 29,... View Obituary & Service Information

The family of Joan P. Morrison created this Life Tributes page to make it easy to share your memories.