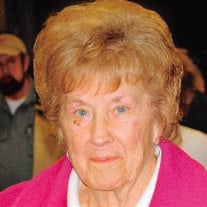 Seabrook – Joan B. Wilson, 83, of Seabrook, died peacefully on Thursday, October 20, 2016 at Exeter Center. She was born June 1, 1933 in Newburyport, MA a daughter of the late Alfred and Florence (Merrill) Locke. Raised in Seabrook, she attended Newburyport High School before marrying her future husband of 53 years the late Edward Wilson who died in 2005. Mrs. Wilson was a dedicated homemaker for a number of years, until 1965 when she went to work at the former Gould Shawmut in Newburyport, retiring in 1998 after 33 years. Most recently she worked at Brown’s Lobster Pound in Seabrook, where she especially loved the people she worked with and socializing with customers. She was a member of the Raymond E. Walton American Legion Post 70 Women’s Auxiliary, Happy Seniors and Trinity United Church all in Seabrook. Joan was an avid Red Sox, Patriot and NASCAR fan who loved people and would always put their needs before her own. She enjoyed dancing, shopping, baking and taking day trips with the happy seniors, but her greatest joy was spending time with family and friends. Family members include her children, Bruce Andrews and his wife Blanche of Kingston, Dianne Chase and her husband Frank of Seabrook and Darcy Romonoski and her husband Rich of Berwick, ME; brother Alvin Locke of Seabrook; sisters, Beverly Perkins and her husband Harold and Debbie Souther and her husband Norman all of Seabrook; grandchildren, Wendy, Tia, Traci, Frank, Bobby, Tommy and Eddie; 6 great grandchildren and several nieces and nephews. In addition to her parents and husband she was predeceased by her brother Robert Locke. Visiting hours will be from 4 to 7 PM on Monday, October 24, 2016 in the Remick & Gendron Funeral Home-Crematory, 811 Lafayette Road, Hampton. Services will be held at 11 AM on Tuesday in the funeral home. Burial will follow in Elmwood Cemetery, Seabrook. Relatives and friends are respectfully invited. Flowers will be accepted, but if desired donations may be made to the American Cancer Society, P.O. Box 22478, Oklahoma City, OK 73123.

Seabrook &#8211; Joan B. Wilson, 83, of Seabrook, died peacefully on Thursday, October 20, 2016 at Exeter Center. She was born June 1, 1933 in Newburyport, MA a daughter of the late Alfred and Florence (Merrill) Locke. Raised in Seabrook,... View Obituary & Service Information

The family of Joan B. Wilson created this Life Tributes page to make it easy to share your memories.