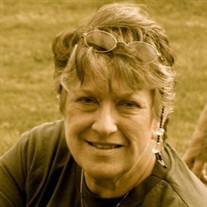 Hampton – Joanne Ellen (Remick) Wood, 68, of Hampton and Southport, FL, passed away peacefully on Sunday morning, September 17, 2017 after recently making it home to Hampton to spend her last days with family and dear friends. Joanne was born in Portsmouth on September 28, 1948, the third child and first daughter of the late Norman F. and Ruth A. (Doble) Remick. Joanne was brought home from the hospital to the family home in Kittery, ME and after relocating to Portsmouth for a few years, the Remick family moved to Hampton in 1959. Joanne graduated from Winnacunnet High School with the Class of 1966, married, and settled in Hampton to raise her two beautiful daughters, Stephanie and Stacie. Many will remember Joanne from her years waitressing at the Galley Hatch in Hampton and many of the people she served and worked beside became great friends. Jo Jo was a kind-hearted, hard-working and loving woman and totally devoted to caring for her girls. She loved her family and had more friends than anyone could imagine. She would never hesitate to do whatever she could to help others less fortunate than herself, even though there were times when she did not have much to give other than being a listening and caring friend and providing a loving shoulder to lean on. Never one to scrimp when it came to feeding the masses, her house was always open and the table was always set for whoever came through the door. She was a great cook, an inherited skill from her Dad, and loved to make others relaxed and happy. No matter where she went, especially in Hampton, Jo Jo would bump into someone she knew and the conversion would begin, often irritating those she was with, but that was how Jo Jo rolled. Joanne had many crafting talents, no doubt learned from her mother, including sewing and needlepoint. She later became a custom framer and framed many pictures for family and friends. She moved to Florida 12 years ago to be near her daughter Stacie and her family and was blessed with the best of both worlds, coming up summers to be with her daughter Stephanie and her family. She was a great mother and a loving and caring grandmother. Although Joanne made some new friends in Florida, she often longed for home. Joanne is survived by her loving daughters, Stephanie Welsh and her husband Dan of Hampton Falls and Stacie Bolster and her husband Steve of Southport, FL; her grandchildren, Addison Welsh and Logan Bolster; her siblings, Norman F. Remick, Jr and his wife Diane of Birmingham, AL, Paul K. Remick and his wife JoAnn of Hampton and Kathleen Barry and her husband Joe, of Hampton. She also leaves her nieces, nephews, cousins and many dear friends. To say that she will be missed is an understatement; there is a hole in all our hearts that will never be filled. She was predeceased by her brother Ronald A. Remick who died in September of 2016. Visiting hours will be from 4 to 7 pm on Friday, September 22, 2017 in the Remick & Gendron Funeral Home – Crematory, 811 Lafayette Rd., Hampton. Services will be held on Saturday at 11 am in the funeral home. Family and friends are respectfully invited. Burial will be private. In lieu of flowers, the family suggests donations to Brookhaven Hospice of NH, 100 Lafayette Rd., Hampton Falls, NH 03844 or to Emerald Coast Hospice, 421 W. Oak Ave., Panama City, FL 32401.

The family of Joanne Ellen Wood created this Life Tributes page to make it easy to share your memories.

Send flowers to the Wood family.