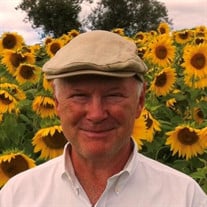 Portsmouth - John Augustus “Jay” Gardner, III passed away peacefully, surrounded by family, on September 3, 2019, in Portsmouth, NH. Jay was born to Jack and Kim Elaine Gardner in Weymouth, MA, in 1957. He grew up in Tewksbury, MA, graduating from Tewksbury High School in 1975 and New England College in 1981. Jay leaves behind his wife of almost 27 years, Laurie A. Kennedy, two daughters, Hannah and Sophia, sisters Kristie, and her husband Bruce, and Tracy, and brother, Glenn, many nieces and nephews, the Tea Club, Red House crew, Opera House Cup, the Big Chill, Rock Lobster and friends from around the world. A consummate host, Jay knew how to throw a party and had a knack for making everyone in a room feel important. He was a generous man with an infectious smile and spirit. His interest in the hospitality industry began in college and continued for decades. A restauranteur, starting at The Seven’s on Beacon Hill, he was then a co-owner for 25 years of The Rattlesnake Bar and Grille on Boylston Street in Boston. He owned The Press Room in Portsmouth, NH, for 24 years and created a space for both performance and enjoyment of all types of music. Jay was also a co-owner of Jumpin’ Jay’s Fish Café in Portsmouth, NH. Rugby, the quintessential English sport, was a passion for Jay, and it captured his imagination after a semester abroad in Arundel, England. He brought back this interest to New England College (NEC) in Henniker, NH, where he started the NEC Men’s Rugby Club (now known as the New England College Rugby Football Club [NECRFC]). In 2014, Jay received the Red Jacket from the Rugby Hall of Fame after being nominated by the NECRFC. In 2016, he received the Deborah Spring Reed ’60 Outstanding Alumni Achievement Award at NEC for his contributions to the college and community. Jay was a dedicated and loving father, husband, brother and friend; he will be dearly missed. Calling hours will be from 4-7pm Sunday, September 8th at Remick & Gendron Funeral Home, 811 Lafayette Road, Hampton NH. Memorial donations can be made to The Association of Frontotemporal Degeneration (AFTD) at [https://www.theaftd.org/support-aftds-mission]

Portsmouth - John Augustus &#8220;Jay&#8221; Gardner, III passed away peacefully, surrounded by family, on September 3, 2019, in Portsmouth, NH. Jay was born to Jack and Kim Elaine Gardner in Weymouth, MA, in 1957. He grew up in Tewksbury,... View Obituary & Service Information

The family of John A. "Jay" Gardner created this Life Tributes page to make it easy to share your memories.