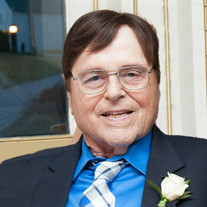 North Hampton – John Donald Abbiuso, 80, of North Hampton, passed away peacefully at his home on Sunday, January 24, 2016. Mr. Abbiuso was born on November 26, 1935 in Milford, MA, the son of the late John A. and Celia M. (Mercier) Abbiuso. John was raised in Milford and was a graduate of St. Mary’s Academy. In 1955, he met the love of his life, Rosemarie (Iarussi) Abbiuso, at the local ice cream parlor where she was working. The young couple were married and settled in Milford for six years before relocating to Holliston, MA where they raised their family. In 1978, the Abbiuso family moved to Brentwood, NH and in 1995, shortly after John’s retirement, they moved to Marco Island, FL. John and Rosemarie returned to New Hampshire in 2011 to be near family and settled in North Hampton. John owned and operated Teck Color Lab in Boston, where he performed specialized film processing services for many professional photographers and retired in 1994 after over 37 years in the business. John had two main hobbies, car collecting and ham radio. To call his car collecting a hobby would be putting it mildly, John was an avid classic car enthusiast. He bought and sold many vehicles over the years and served as a docent for the Miles Collier Collection at The Revs Institute for Automotive Research in Naples, FL. He also enjoyed his other passion, ham radio operation, where he was able to communicate from his station to individuals all over the globe. Above all else, family was his true love and spending time with his children and grandchildren meant the world to him. John will be sadly missed by all who knew and loved him. He is survived by Rosemarie, his beloved wife of over 60 years; his daughters, Kathleen Balcom and her husband, Kevin of Holliston, MA, Karen Briggs and her husband, Stephen also of Holliston and Suzanne Lojko and her husband, Peter of Marlborough, MA; his son John Abbiuso and his partner, Dan Lynch of Greenland; his sister, Audrey Calzone and her husband, Joseph of Marco Island, FL and his 5 grandchildren and 3 great grandchildren. He also leaves his dear friend and caregiver, Robert Barton, who lovingly cared for John during his final years as well as Steve Sorenson of Naples, FL. A Mass of Christian Burial will be celebrated at 11 AM on Saturday, January 30, 2016 at Our Lady of the Miraculous Medal Church, 289 Lafayette Rd., Hampton. Family and friends are respectfully invited and will be meeting at the church. Burial will be private. In lieu of flowers, the family suggests memorial donations be mailed to the American Diabetes Association, 249 Canal St., Manchester, NH 03101 or made online at www.diabetes.org.

The family of John D. Abbiuso created this Life Tributes page to make it easy to share your memories.

Send flowers to the Abbiuso family.