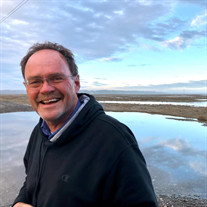 Hampton Falls – John Thomas Alston, 64, of Hampton Falls, passed away suddenly and unexpectedly on Monday, May 25, 2020 at the Exeter Hospital. John was born in Lawrence, MA on January 4, 1956, the only son of the late Donald and Marjorie (Brainerd) Alston. John resided in Hampton Falls for most of his life. He graduated from Winnacunnet High School and went on to study Fine Arts at the University of New Hampshire. On January 9, 2010 he married the love of his life, Debbie Gaudreau, and the two celebrated their 10 year anniversary earlier this year. John loved life and lived a life full of dignity and respect. He was always willing to go the extra mile and was never afraid to try something new. John held many jobs over the years but his true passion was art. He loved to paint, draw and take photographs and he took much of his inspiration from the natural beauty around him. John was an adventurous man who spent countless hours exploring the local marshes. His art truly expressed his deep love of nature and he took great pleasure in sharing his work with friends and family. He and his wife shared this passion and their countless stories made you feel as if you were right there alongside them. He was also an avid music lover and spent many evenings with Debbie dancing and singing along to a live band or playing his own guitar. He was known for his quick wit, his infectious smile and his kind and compassionate spirit. He is survived by his loving wife, Debbie Gaudreau of Hampton Falls, his son, Thomas Alston and wife, Joy, who reside in Hawaii, two stepdaughters; Lisa Gaudreau, of Hampton Falls and Amy Loews and husband, CJ Loews, of Wakefield, Massachusetts, five grandchildren; Benjamin (3) and Isabella Alston (1), Finely (8) and Vivian Loews (6), Ryder Gaudreau (4), and two sisters, Jane Solar and Nancy Skoglund. At this time, funeral services will be for immediate family only. A virtual memorial service in John’s honor will be held at a later date. In lieu of flowers, John’s family asks that you consider making a memorial donation to the Hampton Falls Fire Department.

Hampton Falls &#8211; John Thomas Alston, 64, of Hampton Falls, passed away suddenly and unexpectedly on Monday, May 25, 2020 at the Exeter Hospital. John was born in Lawrence, MA on January 4, 1956, the only son of the late Donald and Marjorie... View Obituary & Service Information

The family of John T. Alston created this Life Tributes page to make it easy to share your memories.

Send flowers to the Alston family.