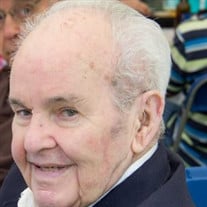 Hampton Falls – John F. Carroll, 95, of Hampton Falls, died April 13, 2022 at his home with family by his side. He was born September 28, 1926, in Lynn, MA son of the late John E. and Edith (Emmons) Carroll. He shared 61 years of marriage with his wife Marie (Murray) Carroll who predeceased him in 2007. John was raised in Lynn and graduated from Lynn Classical High School with the Class of 1944. Immediately after graduation John volunteered in the US Navy. He served in WWII in the pacific theater. He was honorably discharged in June of 1946 and returned to marry Marie two months later. John was employed in the Jet Engine Division of General Electric Corporation in Lynn retiring in 1986 with 35 years of service. John liked fishing, woodworking, creating with stained glass and gardening. And, most of all he loved spending a lot of time with his grandchildren and great grandchildren. After their retirement John and Marie enjoyed traveling. They visited Africa, several countries in Europe, Mexico, Canada and many of the US States. He leaves three children Lynda McLaughlin of Strafford, NH, Kevin Carroll of Austin TX and daughter-in-law Debbie of Hampton, Nancy Tuttle and her husband Larry of North Hampton, five grandchildren, Paul McLaughlin, Shauna Atkinson, Kaitlyn McLaughlin, John Carroll, Shannon Carroll and seven great grandchildren. He also leaves his siblings, Dorothy D’Entremont of Peabody, MA, Edward Carroll of Lynn, MA and Paul Carroll of Sun City, FL. In addition to his wife and parents he was predeceased his brother William Carroll and son-in-law Paul McLaughlin. A graveside service will be held at 11:00AM on Friday, April 22, 2022, in Oak Lawn Cemetery, Nason Road, Hampton Falls. Relatives and friends are respectfully invited. In lieu of flowers donations may be made to St Jude Childrens Research Hospital Arrangements are by the Remick & Gendron Funeral Home-Crematory, Hampton.

The family of John F. Carroll created this Life Tributes page to make it easy to share your memories.

Send flowers to the Carroll family.