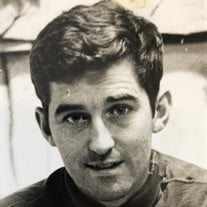 Rye Beach – John J. Clifford, DMD, age 74, passed away peacefully on Saturday, February 17, 2018 at his home in Rye Beach after a brief illness. John was born on August 19, 1943 in Lawrence, MA, the second eldest child of four sons born to James H. Clifford and Josephine Callagy. John attended the University of New Hampshire in Durham and completed his DMD at Tufts University in Boston, MA. John married Katherine Lumaghi of St. Louis, MO in St. Louis, MO in June of 1968. After serving two years as a Captain in the US Army, John and Kate settled in Rye Beach and raised three children, Katherine (Katie), John, and Elizabeth (Liz). In 1972, John established his dental practice, opening an office in Portsmouth, NH where he practiced family dentistry until retiring in 2001. John was an avid sportsman with a lifelong love of pond hockey and iceboating. He loved the outdoors, gardening, working in the woods and especially being on the ocean, fishing and lobstering from Rye Harbor. He was active in civic affairs serving on various town committees. He will be fondly remembered for his cheerful spirit and genial engagement. Surviving family includes his three children and their spouses, Katie Nadeau (Tom), John Clifford, and Liz Clifford (Wayne), and his five grandchildren Henry Nadeau, James Clifford, Thomas Nadeau, Evan Clifford and Sasha Clifford. John is also survived by his brothers Thomas Clifford (Geri) of Rye and William Clifford (Lee) of Hampton as well as his sisters- and brothers-in-law and his many nieces and nephews. John was preceded in death by his wife Katherine, mother Josephine, his father James and his brother James. Visiting hours will be from 4 to 7 pm on Thursday, February 22, 2018 in the Remick Gendron Funeral Home - Crematory, 811 Lafayette Road, Hampton. A Mass of Christian Burial will be celebrated at 11 am on Friday at St. Theresa’s Church, 815 Central Road, Rye Beach. All those attending the funeral mass are requested to go directly to the church. Burial will be private.

The family of Dr. John J. Clifford DMD created this Life Tributes page to make it easy to share your memories.