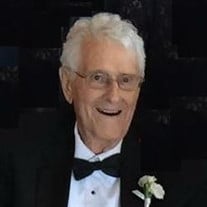 Rye - John “Jack” C. De Niro, 90, of Rye and formerly of Syracuse, NY and Delray Beach, FL, died Friday, November 13, 2015 with loving family by his bedside. Mr. De Niro was born in Syracuse, NY on August 23, 1925, the son of the late Henry and Helen (O’Reilly) De Niro. Jack was raised in Syracuse and graduated from Syracuse University. He entered the United States Marine Corps prior to college and served his country honorably in the Asiatic Pacific Arena during WWII and participated in the invasion of Okinawa. After the war, Jack returned home, married and settled in Syracuse to raise his family. A real estate broker by trade, Jack held offices in Manhattan and Delray Beach. He relocated to Rye in 2011 to be near family as his health declined. He is survived by his daughters, Jean De Niro and Linda De Niro, both of Manhattan, NY, Dana De Niro-Moulton and her husband Tom Moulton of Rye; his sister, Joan Bauder of Southington, CT and his beloved grandchildren, Tyler Pipher of Delray Beach, FL, Lauren Pipher of Los Angeles, CA, Rachel Cargo and her husband Michael of Boston, MA, Cassandra Moulton of San Francisco, CA; and his nieces and nephews, Robert De Niro and his wife Grace of Manhattan, NY, Scott Bauder and his wife Rene of Kauai, HI, Steven Bauder and his wife Louise of Southington, CT, Robin Bauder and his wife Sherri of Bristol, CT, and Mary Jo O’Leary and her husband Dave of Wenham, MA. In addition to his parents, Jack was predeceased by his brother, Robert De Niro, Sr. Visitation will be from 4 to 7 pm on Tuesday, November 17, 2015 in the Remick & Gendron Funeral Home, 811 Lafayette Rd., Hampton. A Mass of Christian Burial will be celebrated at 10 am on Wednesday at St. Michael’s Church, corner of Front and Lincoln Streets, Exeter. Family and friends are respectfully invited. Burial will be private. In lieu of flowers, the family suggests donations to the Wounded Warrior Project, P.O. Box 758517, Topeka, KS 66675 or online at www.woundedwarriorproject.org/donate.aspx.

The family of John C. De Niro created this Life Tributes page to make it easy to share your memories.