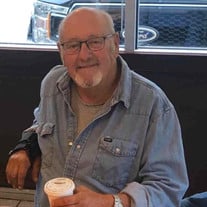 North Hampton – John H. Durant, 77, of North Hampton, died Friday, December 3, 2021 at his home after a courageous battle with pancreatic cancer. He was born in West Newbury, MA January 16, 1944 a son of the late Hollis and Audrey (Swap) Durant. John graduated from Exeter High School with the Class of 1964. He was the longtime owner and operator of Durant Heating & Cooling. John had a love for farming & gardening and in his earlier years, he raised beef cattle, horses and chickens on his small farm named the Li-Ken-Sco Farm. Another love was his tractors and haying equipment. He was very content in the seat of any tractor in the fields. In his later years, you would find him on his New Holland tractor that his late son, Scott, had bought for him. In his early 50’s he was well known for being the driver of the 47 Orange Race Car at Lee USA Speedway. He earned his championship in 1992 and later became an official pit inspector. In the meantime, he was busy in his well tool equipped garage, restoring a 1937 Plymouth Coupe. He enjoyed his daily meeting up with friends for coffee or lunch at Marelli’s Market or Wilber’s Diner, catching up on the latest news. He shared 57 years of marriage with his wife Nancy (Andrews) Durant. He enjoyed overwhelming her with the overwhelming produce of his gardens for the chores of canning. In addition to his wife, he leaves his daughter, Lisa Durant-Merrill of Kingston, grandchildren Stephen John Merrill of Kensington, NH, Robert Kenneth Merrill of Aspen, Colorado and Taylor Noel Durant of Exeter, NH, his siblings Joyce Goodwin of Delaware, Alicia Smith of Wisconsin, Ellen Meekins and Hollis Durant, Jr. both of Exeter. Several nieces, nephews, cousins. In addition to his parents, he was predeceased by his sons James in 1965. Kenneth John in 1989 and Scott Edward in 2019. Visiting hours will be held from 3 to 5 PM on Thursday, December 9, 2021 in the Remick & Gendron Funeral Home-Crematory, 811 Lafayette Road, Hampton. Private burial will be in the Center Cemetery, North Hampton. In lieu of traditional remembrances, donations may be made to Annie’s Memorial Fund, 8 Jana Lane, Stratham, NH 03885 (for Annie’s Helping Hands assisting cancer patients).

North Hampton &#8211; John H. Durant, 77, of North Hampton, died Friday, December 3, 2021 at his home after a courageous battle with pancreatic cancer. He was born in West Newbury, MA January 16, 1944 a son of the late Hollis and Audrey (Swap)... View Obituary & Service Information

The family of John H. Durant created this Life Tributes page to make it easy to share your memories.

Send flowers to the Durant family.