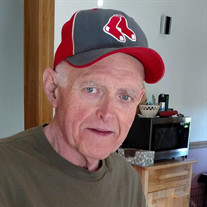 Seabrook – John T. Farrell, 78, of Seabrook, passed away peacefully surrounded by his loving family on Monday, August 26, 2019. John was born on July 19, 1941 in Chicago, IL, a son of the late Carl and Margaret (Stocking) Farrell. He was a lifelong resident of Medina, NY and earned his under graduate degree from Ithaca College in Oswego, NY. John taught high school Physical Education in Oswego where he also coached soccer and swimming with some of his swimmers going on to compete in the Olympics. He also worked for the Fermi Nuclear Plant in New York before taking a job at the Seabrook Nuclear Plant in the early 1980s. He had many hobbies and interests with New England sports, particularly the Red Sox and Patriots being his favorites. He enjoyed bicycling, golfing, sailing and camping. He loved the outdoors and some of his happiest times were camping with his family in Wells, ME. John met his beloved wife Patricia Ann (Long) Farrell in 1984 and they shared over 34 years together. In addition to Pat, John is survived by his son, Sean J. Farrell of North Hampton and his daughter, Kathleen M. Brodeur and her husband, David of North Chelmsford, MA. Visitation will be from 4 to 7 PM on Tuesday, September 3, 2019 in the Remick & Gendron Funeral Home – Crematory, 811 Lafayette Road, Hampton. A mass of Christian burial will be celebrated at 10 AM on Wednesday, September 4, 2019 in Our Lady of the Miraculous Medal Church, 289 Lafayette Road, Hampton. Burial will be private. If desired, memorial donations may be made to the Rockingham County Resident Fund, 117 North Road, Brentwood, NH 03833.

The family of John T. Farrell created this Life Tributes page to make it easy to share your memories.

Send flowers to the Farrell family.