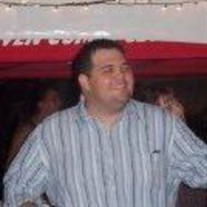 Exeter – John Anthony Ferrelli II, 45, of Exeter, passed away suddenly and unexpectedly on Monday, October 19, 2020 at the Exeter Hospital. John was born in Portsmouth on May 31, 1975, a son of Gail M. Howland of Freeport, ME and John A. Ferrelli of Portsmouth, NH. John spent most of his youth in Portsmouth and graduated from Portsmouth High School with the Class of 1994. Shortly after graduation, he enlisted in the United States Army. Upon his discharge, he returned home and went to work with his life-long friend, Josh Hudson, at the Seabrook Nuclear Plant. After 4 years in Seabrook, John went to work for Newark Atlantic Paperboard of Lawrence, MA and in 2003 took a position with Foss Manufacturing in Hampton, where he was working at the time of his death. John was a hard-working and loving family man. His family was his world and he never missed any of his son John’s many sporting events, even after working all night. He managed Babe Ruth, Cal Ripken baseball, and also volunteered his time as a coach for the Little Warriors Football Team. He also loved watching John and his teammates compete at their wrestling tournaments. He served an inspiration to his son and many of his son’s friends and teammates. When he did have any free time, John loved watching sports, especially the Patriots and always enjoyed playing cards, poker being his favorite, with his friends and family. He loved spending time with his daughter Fionna at the park, and spending time with Ninya teaching her how to drive. In addition to his parents, John leaves his significant other, Amy DesRochers of Hampton, his son, John Ferrelli, III, of Exeter, his daughters Fionna Ferrelli and Ninya Beckwith, his brother Justin Lampros of Freeport, ME, his sister, Stephanie Indeck of Lovell, ME, and his nephews Cameron Brown and Jacob Indeck. He also leaves his best friend Joshua Hudson of Portsmouth, John’s mother, Margaret Janvrin, of North Berwick, ME, and his aunts, uncles, and cousins. He was predeceased by his brother, Joseph Ferrelli. Visitation will be from 5 to 8 PM on Tuesday, October 27, 2020 in the Remick & Gendron Funeral Home – Crematory, 811 Lafayette Road, Hampton. Masks are required and social distancing must be maintained. Services and burial will be private. In lieu of flowers, memorial donations may be made to John’s son and daughter, Fionna and John Ferrelli III in their time of need. Please visit GoFundMe

Exeter &#8211; John Anthony Ferrelli II, 45, of Exeter, passed away suddenly and unexpectedly on Monday, October 19, 2020 at the Exeter Hospital. John was born in Portsmouth on May 31, 1975, a son of Gail M. Howland of Freeport, ME and John... View Obituary & Service Information

The family of John A. Ferrelli II created this Life Tributes page to make it easy to share your memories.

Send flowers to the Ferrelli family.