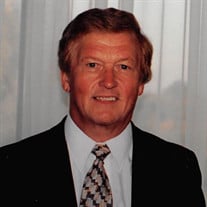 Hampton - Having the great fortune of enjoying 88 years of what he&#8217;s called &#8220;smooth sailing&#8221;, John, Dad or Dziadziu has been the head of our small tight family. And until March when he was greeted by a surprise illness, he... View Obituary & Service Information

The family of John C. Goclowski Jr. created this Life Tributes page to make it easy to share your memories.

Hampton - Having the great fortune of enjoying 88 years of what...

Send flowers to the Goclowski family.