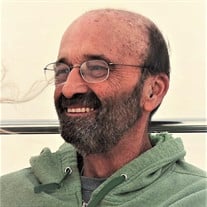 Portsmouth - John Francis Greene, 67, of Portsmouth, passed peacefully on August 2nd, 2017 after a long and courageous battle with cancer with Jo-Ann, the love of his life, at his side, Jo-Ann. Born on December 17th, 1949 he was raised by his loving parents George and Lillian (Gillis) Greene in Ipswich, MA with his younger siblings Ruth and Don. John had a lifelong passion for cooking and studied at The Culinary Institute of America in Connecticut. He had a long and successful career doing what he loved, working hard to make good food and being warm with those he worked alongside. John met his wife to be Jo-Ann Kimmence of Gloucester, MA, when they were only 18 years old and they were inseparable ever since. They shared 47 wonderful years of marriage, John passing just one day after this milestone, fulfilling a promise he made to Jo-Ann that he was determined to keep. They raised two children, Meghan and Matthew, and opened their door to all of their children’s friends, forming long and lasting bonds with many till this day. Whether meeting people through one of his children, from his many hard working days, or anywhere he had opportunity to share a nice word and give a friendly smile, John won over the hearts of everyone he came into contact with. His subtle charm and warmth made him someone you just wanted to be around. Along with the amazing relationship with his wife, John shared a lifelong brotherly bond with his best friend Mike Wright of Ipswich, MA. Mike was instrumental in making John’s final days memorable ones, and John and Jo-Ann both loved and appreciated him for his absolute loyalty as a friend. John leaves his wife of 47 years, Jo-Ann Greene of Portsmouth, daughter Meghan Greene of Exeter, son and daughter in law Matthew and Victoria Greene of Brentwood, Grandson Braden Greene of Brentwood, sister and brother in law Rich and Ruth Kucij of Bolingbrook, IL along with their daughters Jill and Corey, sister in law Sherry Greene of Ft. Myers FL and her children Stephen and Karen. He was predeceased by his parents George and Lillian Greene of Ipswich MA, and his younger brother Don Greene of Ft. Myers, FL. John and his family could not possibly express their appreciation to his entire “Medical Family”. All the nurses and doctors he had shed a glimmer of light on an otherwise dark situation, and for this they will always be grateful. Visiting hours will be held from 5 to 7 PM on Friday, August 11, 2017 in the Remick & Gendron Funeral Home – Crematory, 811 Lafayette Rd., Hampton. In lieu of flowers Jo-Ann would ask you to raise a glass and share a memory of John with your loved ones and cherish the time you have with them as much as she did her time with John.

Portsmouth - John Francis Greene, 67, of Portsmouth, passed peacefully on August 2nd, 2017 after a long and courageous battle with cancer with Jo-Ann, the love of his life, at his side, Jo-Ann. Born on December 17th, 1949 he was raised by his... View Obituary & Service Information

The family of John F. Greene created this Life Tributes page to make it easy to share your memories.

Send flowers to the Greene family.