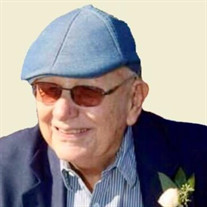 Hampton – John S. Hird, Jr., 93, of Hampton, died Sunday, April 19, 2020 at his home with his companion and family by his side. He was born January 8, 1927 in Lawrence, MA the son of the late John S. and Marion (Hewitt) Hird, Sr. Jack as most people knew him, graduated from Wakefield, MA High School and from the University of New Hampshire. He was employed as a District Engineer for the State of Connecticut Department of Transportation working in highway construction and retired in 1978 after 25 years of service. Upon his retirement he continued his career for several more years as the Director of Public Works in Keene, NH. In recent years he made his home in Hampton while also spending time at his family home on Lake Winnipesaukee in the summer. He was an avid fan of all UNH sports and especially enjoyed following his grandchildren’s hockey careers. He is predeceased by his wife of 63 years Priscilla (Stone) Hird. He leaves a sister Jean Johnson of Sharon, VT along with three sons and their wives, George & Debbie Hird of Southington, CT, Bruce & Aggie Hird of Durham, Jeff & Maureen Hird of York, ME, longtime companion Joyce Mills of Hampton, grandchildren Amanda, Stephen, Michele, Katherine, Zach, Julia, Caroline, Maggie, great grandchildren Charlie and Spencer and several nieces and nephews. A celebration of life will be held at a later date. In lieu of traditional remembrances donations may be made to the UNH Foundation for Athletics or the Wentworth-Douglass Seacoast Cancer Center. Arrangements are by the Remick & Gendron Funeral Home-Crematory, Hampton.

The family of John S. Hird, Jr. created this Life Tributes page to make it easy to share your memories.