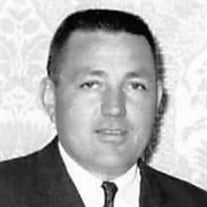 Hampton – John J. “Jack” Lessard, 93, of Hampton, died Saturday, October 16, 2021 after a period of failing health. He was born in Hampton Beach, February 14, 1928 a son of the late Edgar and Mary (Desmond) Lessard. Jack was a lifelong resident of Hampton and was a graduate of Hampton Academy. He was a veteran of WW II serving in the US Navy aboard the USS Missouri (BB-63) and was on the battleship when the peace treaty was signed in Tokyo Bay and is best remembered as the site of the surrender of the empire of Japan which ended WWII. After serving in the Navy Lessard ran a dairy farm with 60 cows in Hampton. He then made a career in automobile sales beginning with the former Hackett and Wallace Chevrolet and many years as a partner at Scott Pontiac and finally with Banks Chevrolet Buick GMC retiring at the age of 80. Jack was also a real estate entrepreneur and developed several parcels of land. He was a communicant of Our Lady of the Miraculous Medal Church and was member of the Holy Name Society. Jack served the town of Hampton as selectman, zoning board member, planning board member, and was on the municipal budget committee. He also served on the Odd Fellows clock restoration committee. Lessard was one of eight children in his family and he lost his mother at the age of five and as a young boy became a resident at the state farm in Harvard, Mass. One Christmas he recalls getting a pair of socks, while kids in another section of the camp got teddy bears. He would have preferred the bear. He later became known as the “Bear Man” dedicated to providing teddy bears every year at Christmas to young ill children at Dartmouth Hitchcock Hospital and Boston Children’s Hospital as well as the elderly. Jack and his daughter Kathleen, bred, raised, and showed Morgan horses through the 50’s and 60’s. Winning many awards, and making their ‘Great Hill Morgan Farm’ one of national distinction and notoriety within the Morgan community. He shared 32 years of marriage with his wife Bette J. (Fogg) Lessard. In addition to his wife he leaves his daughter Kathleen “Patty” Leary, two grandchildren Christopher Leary, Abbygail Ritondale, his great grandchildren Zoe and Ruby Ritondale and many nieces and nephews. He was predeceased by his loving wife Antoinette P. Lessard and daughter Toni Marie Lessard, and his siblings, Cornelius, Patrick, William, Mary, Paul, R. Vic Lessard and Constance Vogt. Visiting hours will be from 6-8 P.M. Monday, October 25, 2021 at the Remick & Gendron Funeral Home-Crematory, 811 Lafayette Road, Hampton. A mass of Christian burial will be celebrated at 10 A.M. Tuesday, October 26, 2021 at Our Lady of the Miraculous Medal Church, 289 Lafayette Road, Hampton. Burial will follow in the High Street Cemetery, Hampton. Relatives and friends are respectfully invited. In lieu of traditional remembrances, donations may be made to the New Hampshire S P C A

The family of John J. "Jack" Lessard created this Life Tributes page to make it easy to share your memories.