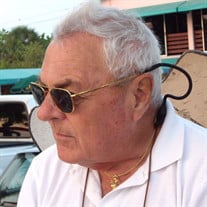 Hampton – John J. “Jack” Meaney, Jr., 86, of Hampton passed away peacefully on Tuesday, March 14, 2017 after an extended illness. Jack’s beloved family was by his bedside. He was born in Etna, NH on August 7, 1930, a son of the late John J. and Nora (McNulty) Meaney, Sr. Jack was raised in Canaan, NH and later Belmont, MA. He graduated from BC High School in Boston, MA and earned his Bachelor’s Degree from Boston College with the Class of 1953. After graduation from college, Jack was commissioned as a First Lieutenant and served his country as a United States Marine Corps Officer. Following his discharge, he founded Jack Meaney and Associates Inc., a manufacturing representative firm of Hampton and received many awards of distinction during his 34 year tenure in business. Additionally, Jack and his longtime companion, Phyllis Gidley, opened Jack’s P.O. Box Restaurant in Hampton which they operated from 1989 to 1993 until Jack fell ill. Jack and Phyllis have wintered in Bonita Springs, FL for over 15 years. They loved to travel the world in their retirement years and especially enjoyed vacation cruises and their many visits to Switzerland. He was a member of the Marine Corps League and the Moose Lodge in Bonita Springs and lifelong member of Hampton’s American Legion Post 35. In addition to Phyllis, his love of over 30 years, Jack is survived by his sons, William L. Meaney and his wife Judith and John J. Meaney III, his wife Eileen and her children, Hailey and Jack, and his daughter Barbara Ann Meaney. His grandchildren include; Erin Marie Chabot, Caitlin Terese Meaney, Shannon Beth Meaney, Anja and Nelson Meaney and Michael Gough, USAF. He also leaves Phyllis’ children Glenn, Pamela, Daniel and his wife Darlene; Phyllis' grandchildren Adam, Erica, Alexis and Keegan Gidley. Jack was predeceased by his parents John and Nora Meaney, his sisters Mary, Alice, Francis, Helen and his beloved daughter Janet Marie Gough. Visiting hours will be held from 3 to 6 pm on Monday, March 27, 2017 in the Remick & Gendron Funeral Home – Crematory, 811 Lafayette Rd., Hampton. Services will be held at 6 pm in the funeral home immediately following the visitation. Family and friends are respectfully invited. Burial will be private. If desired, memorial donations may be made to the Marine Corps League Scholarship Fund, Detachment #394, 238 Deer Street, Portsmouth, NH 03801.

The family of John J. "Jack" Meaney created this Life Tributes page to make it easy to share your memories.

Send flowers to the Meaney family.