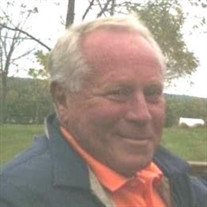 Exeter - John S. “Jack” Kopka, III , 83, of Exeter, passed away peacefully on Wednesday April 15, 2020 after a battle with cancer. Jack was born in Nashua on January 5, 1937, the son of the late John S. Kopka, Jr. and the late NH State Rep. Angeline (Landry) Kopka. He was a loving and devoted husband to Margaret “Maggie” Connor of Exeter. Jack graduated from the University of New Hampshire where he was enrolled in the Air Force ROTC program. He honorably served his country as a Captain in the Air Force until 1969. A few of his medals and commendations include the Air Force Commendation Medal, National Defense Service Medal, Longevity Service, Outstanding Unit Award, Small Arms Expert Marksmanship Ribbon, Vietnam Service Medal and Republic of Vietnam Campaign Medal. He was able to travel the world including more than 90 countries. Upon leaving the Air Force, Jack joined the family business, Kopka Real Estate. He was an accomplished and industrious commercial real estate developer in NH, Maine and Massachusetts. Many of his developments can be seen today. Jack loved to play golf, catch up on the daily news and was very active in the community of Hampton. He had an amazing ability to recount his life’s adventures and entertain people with his stories and anecdotes. The only thing he loved more than real estate was his family. In addition to his beloved Maggie, Jack is survived by his children, Susan Flynn and her husband David of Cincinnati, OH, Michael G. Kopka and his wife Sarah of Manchester, Michael J. Kopka of Nashua and Jennifer K. O’Blenis of Ormond Beach, FL; his step-children, Daniel DiCesare, Christian DiCesare, Kyle DiCesare, Nora DiCesare and Connor DiCesare; his grandchildren, David Canavan, Jr., Joseph Canavan, Michael Canavan, Angeline Kopka, Darian Kopka, Michael Kopka, Jr. and Sydney O’Blenis. He also leaves his sister Janice Geno and her husband Merrill, Litchfield. Due to the current pandemic, public services are postponed. Private burial was held in the New Hampshire State Veterans Cemetery. If desired, memorial donations may be made to Hero Pups, 20 Portsmouth Ave., #127, Stratham, NH 03885.

The family of John "Jack" S. Kopka III created this Life Tributes page to make it easy to share your memories.

Send flowers to the Kopka family.