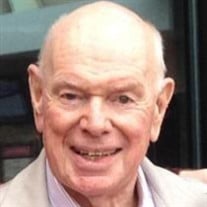 Exeter - John H. “Jack” Leary, 90, passed away suddenly yet peacefully at Langdon Place of Exeter on Tuesday Nov 9, 2021. Jack was born in Boston on November 11, 1930 and raised in Charlestown, MA. He was preceded in death by his daughter Maureen, parents Edward and Mary (Morris) Leary, his sister Barbara (Wall) and his brother Edward. He is survived by his devoted wife of 64 years E. Patricia “Pat” (O’Connell) of Exeter, his sister Ellen Leary of Cambridge, MA, his son John H. Leary Jr. and wife Brenda (Nyland)of Grapevine, TX, daughter Elizabeth and husband Robert Thayer of Granada Hills, CA and daughter Eileen and husband James Francis of Westport, CT. He is also survived by his grandchildren Kate Leary and husband Michael Wisniewski, John R. Leary and fiancé Bethany Darrough, Robert Thayer, Nathan Francis, Robert Francis as well as great grandchildren Jack and Will Wisniewski. Jack graduated from Malden Catholic High school and Boston College class of 1952. He was a decorated Korean War US Army Veteran receiving a Purple Heart, Bronze Star and numerous other commendations for valor and leadership in combat. After Korea, he joined the New England Telephone Company where he spent his entire career, retiring in 1990 as an executive with Verizon. Subsequently he served for several years as a mediator for the National Labor Relations Board. After raising their 4 children in Stoneham and Reading MA, Jack and Pat moved to Hampton, NH and ultimately to Exeter, NH. Jack enjoyed a very active retirement which included worldwide travel with Pat, all things BC # Go Eagles!!, tennis, cross country skiing, golf, and most of all quality time with family and friends. Jack was a hands-on volunteer with many charities and church sponsored programs throughout his life including the Telephone Pioneers of America, the Special Olympics, the Knights of Columbus, and the St. Vincent De Paul Society where he served in several leadership roles. He was a youth hockey coach and referee, CCD teacher as well as lector and Eucharistic Minister at St. Patrick’s in Stoneham, St. Athanasius in Reading and Our Lady of the Miraculous Medal in Hampton. As a son, brother, husband, father, grandfather, great grandfather, teammate and friend he will be remembered as strong, selfless, kind, honest, smart, loyal and funny. Just a great guy who made all who knew him feel special. The family would like to thank the staff at Langdon Place of Exeter for their genuine care and support. A mass of Christian burial will be celebrated at 10:00 AM Monday, November 15, 2021 at Our Lady of the Miraculous Medal Church, 289 Lafayette Road, Hampton followed by a graveside service at Exeter Cemetery. Relatives and friends are respectfully invited. In lieu of flowers, the family requests that donations be made to the St Vincent De Paul Society of Hampton 289 Lafayette Road, Hampton NH 03842. Arrangements are by the Remick & Gendron Funeral Home-Crematory, Hampton.

The family of John "Jack" Leary created this Life Tributes page to make it easy to share your memories.